Silver production at the world’s largest producer fell significantly in the first quarter of the year. Fresnillo PLC reported a decrease in silver production in Q1 2019 versus the same period last year, due to lower ore grades and reduced volumes of processed ore at its Fresnillo Mine.

Furthermore, while silver production fell the most at its Fresnillo Mine, the company also experienced declines at its Saucito and San Julian Mines. Total silver production at Fresnillo PLC dropped by 15% in the first quarter compared to the same quarter in 2018. 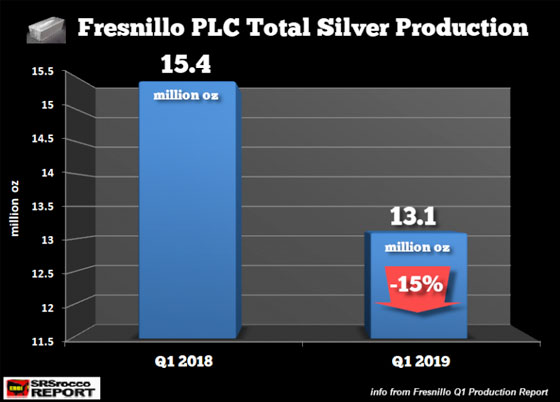 So, as we can see, silver production fell across the board at all of the company’s mines. Surprisingly, another primary silver producer also reported a substantial decline in production. Endeavour Silver saw its production fall a stunning 21% in the first quarter: 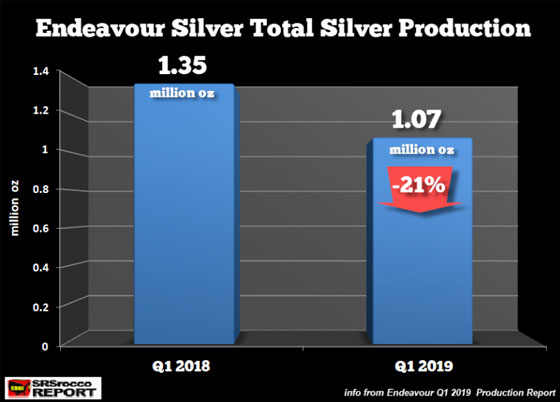 Silver production and Endeavour plunged to 1.07 Moz in Q1 2019 versus 1.35 Moz during the same period last year. In the news release, the CEO stated the following:

Bradford Cooke, Endeavour CEO, commented, “All four mines typically start slowly each year as we commence our annual capital investments, then production improves as the mines work toward achieving their annual mine plans.

I find this an interesting statement from the CEO because the data is based on the first quarter of each year. Yes, it might be true that production continues to increase in the following quarters, but they are not basing the decline in silver mine supply from the last quarter of 2018.

Regardless, it’s quite amazing how quickly production can decline at two primary silver miners. While Fresnillo PLC plans to increase silver production over the next several years, it will be interesting to see how Mexico becoming a net importer of oil, for the first time in 50 years, will impact the country’s mining industry for the foreseeable future.