When (Not If) Silver Has a "Bitcoin Moment" 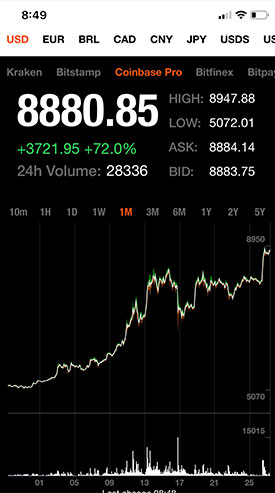 As if on cue, BTC began an epic upside run, easily slicing through his initial target! Following an $8,600 print, the price cratered to $6,600, then back to... $8,400! Who knows where it will be when you read this, but I suggest that there is something important to be learned here…

The moral of this little tale is that when holding a position like physical metals, which has gone through a lengthy underperformance, the tendency is to liquidate it at the first sign of a strong price rise.

But you might also be selling out of what becomes an epic bull run. There's just no way to know for sure ahead of time.

It's absolutely vital to "take some profit" as long as you distinguish between "speculative" and Core holdings. Don't sell the Core until you feel strongly that the secular run is coming to an end.

In 1999, Warren Buffet publicly stated that he believed the stock market bull was over. It lasted another year, but since he "got out too soon," he was able to side-step the carnage that followed.

A number of years from now, evidence may indicate you should sell all but your insurance portion. Even if the top is higher, but you manage to take a big bite from the middle, that's great!

I personally knew of such a "sandwich trader' – a Canadian who bought silver futures and physical metal at $7, selling ALL of it at $18. Of course, the price eventually went to $50 in early 1980, but he never looked back; never tried to buy in again. By sticking to his plan, he literally made and kept millions.

Others, who got in much higher (or lower but never sold) saw silver decline precipitously from $50 to $10.80, and then rally to $25 (the classic 50% retracement), before slowly sinking to $4 over the next two decades.

Could Silver experience one (or more) "bitcoin moments"? I believe the answer is "yes."

Conceptually, some similar elements are in place. From mid-2011, silver has experienced a lengthy, corrosive decline. In December 2017, after bitcoin topped near $20,000, it (like silver) established a series of lower lows and lower highs under a flood of negative press - classic behavior during an entrenched bear phase.

No one has predicted that silver will go to zero like they have for bitcoin (because silver literally cannot), but a chorus of worn-out bulls and perma-bears still opine that the metal is either destined to flat-line forever or have any rally capped by "da boyz" on Wall Street or the Federal Reserve.

If you feel this way, consider that silver alone among the metals has yet to exceed all-time nominal highs above its futures basis $52.

Let me add a third factor to David Morgan's take which we fully discuss in our book, Second Chance...

We have not yet seen a public-participation mania blow-off to signal culmination of the final and most explosive phase of a secular trend that's been backing and filling for almost two decades – a topic to which I've devoted several essays at Money Metals during my five years as a contributor.

You can – and should – do the research yourself, but I will say without equivocation, that the most explosive, most profitable phase yet (for the reasons David Morgan has repeatedly stated) lies directly ahead.

I see newly visible meaningful data points indicating that the onset of a powerful, enduring next leg up is germinating right now. It could announce itself as a "bitcoin moment" – likely just one of several big spikes on the way to three-digit silver.

Silver prints a new intermediate, several days' low under $14 on the charts, then moves back up for awhile into wide-ranging "get nowhere" prices.

One day (probably in a Sunday evening market session) the price jumps seventy-five cents, and during the next few days, rockets upward several dollars, running to a two-week close above $25 the ounce.

It then proceeds to collapse back to $20, a classic 50% Fibonacci retracement level.

Now what? Do you buy $5-6 higher (at more expensive premiums and questionable supply) than you could have just a few weeks before? Or hope this is just a "bull trap" that retreats back to $14?

Lest you think this is not possible, consider that the historic 1979-80 moon-shot saw several four-dollar silver intraday fluctuations – at a time when the purchasing power of five dollars now required just one dollar back then!

So, don't sit around with "not enough" – or not any – physical silver (and gold) until a "bitcoin moment" in the metals takes place.

If you hesitate long enough, you just might find yourself benched during the entire "last 10% (and majority profit potential) of an explosive finale. But by all means, avoid contracting a terminal case of FOMO (fear of missing out), which causes you to buy the top!