GOLD vs. PAPER MONEY: Production Cost Is A Good Indicator Of Real Value

The U.S. Treasury printed another $243 billion worth of paper money in 2018, with the majority being issued as $100 Federal Reserve Notes. What’s interesting is that the Reserve Banks estimated the number of notes they were going to remove from circulation and destroy accounted for 75% of the U.S. Treasury 2018 print order.

However, according to the FederalReserve.gov website, the currency in circulation in 2018 increased by approximately $100 billion: 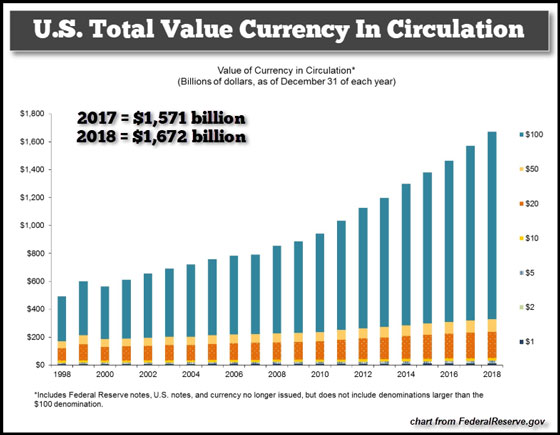 So out of the $243 billion in new printed Federal Reserve Notes in 2018, only $100 billion were used to increase the total Currency in Circulation. But, we also must take into consideration the stockpile of new notes sitting at the Federal Reserve Banks besides the new 2018 printed notes.

Either way, the U.S. Treasury printed $243 billion in new Federal Reserve Notes last year… do you know at what cost? Well, let’s first look at the number of notes printed in each domination; 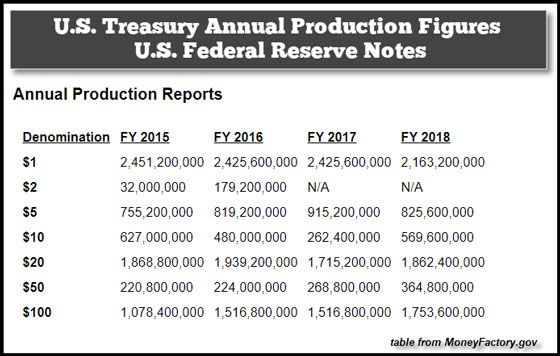 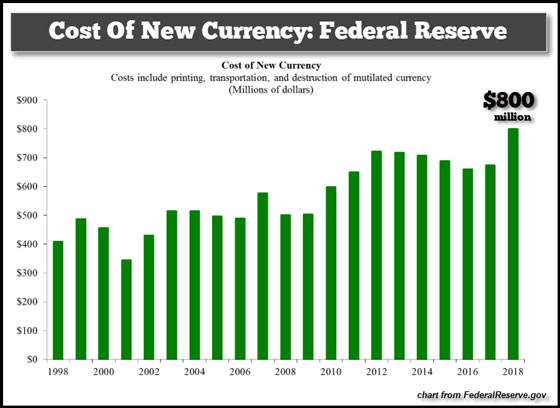 A part of the $800 million figure is for removing and destroying the old bills. Now that we know the cost to produce paper money, how does that compare to Gold? Global gold production was estimated to be approximately $136 billion last year. We arrive at the figure by multiplying 107 million oz of gold production by the average gold price of $1,268 (Kitco.com). 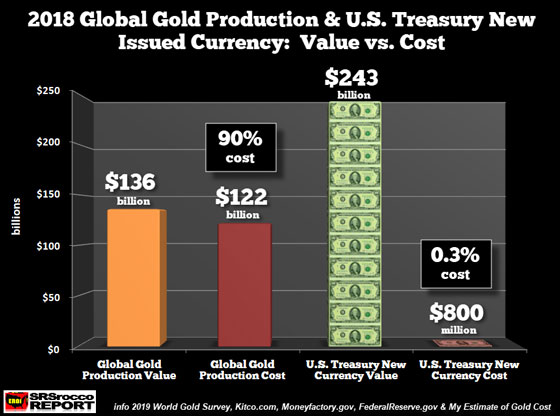 If we assume a conservative 90% total cost of production for gold for 2018 (my estimate based on my research), then it would equal $122 billion to extract, mill, and refine 107 million oz. However, it only cost $800 million for the U.S. Treasury to print $243 billion in new Federal Reserve Notes. Thus, the total cost of printing is one-third of one percent.

So, if it costs 0.3% to print new paper money, what’s the real value?? I am not saying the value the U.S. Government states the Federal Reserve Notes are worth, but if you had to sell them as paper scrap?? How much is paper scrap worth? On the other hand, what if you took in an ounce of gold to a reputable dealer or pawn shop? How much would they give you for your 1 oz of scrap gold? They would likely buy it very close to the gold spot price, including their premium for doing business.

Furthermore, you will notice that as Paper Money loses value, the look of the bill goes from “Classy” to “Gaudy:”

As the U.S. $100 bill transitioned from a Gold Certificate to a Federal Reserve Note now backed by $22+ trillion in debt, the look of the currency resembles more and more like Monopoly Money than real money. If you look at the little “yellow 100 numbers” printed all over the place to the left of Benjamin Franklin’s face, it almost looks like a child stamped those. 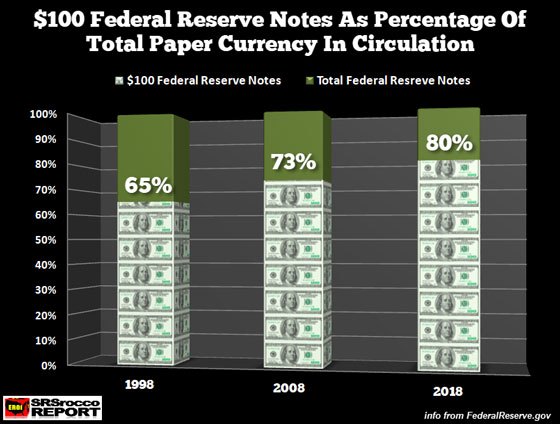 Lastly, the U.S. Dollar will come under serious threat as the global economic system starts to unravel when the lack of global oil production growth (soon decline) can no longer prop up the massive debt. At that time, the cost to produce money will offer a clue as to which form of money will be the ultimate protector of wealth.