Gold & Silver Update: Setting Up for the Next Leg Higher in 2020

The precious metals continue to consolidate from their summer breakouts. While some analysts debate whether or not silver “Broke Out” this year, I am in the camp that a close above the 50 Month Moving Average was a BIG DEAL.

But first, here is the daily silver chart: 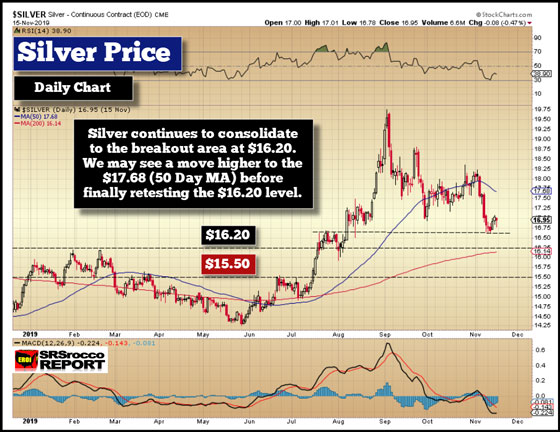 After silver reached a high of $19.75 at the beginning of September, it’s been consolidating lower, back to the $16.20 breakout level. I believe silver may experience a bit of a move higher to the $17.68 level (50 Day Moving Average) before heading lower to retest the $16.20 level.

There was also a nice liquidation of Commerical Silver Shorts during least weeks COT Report. 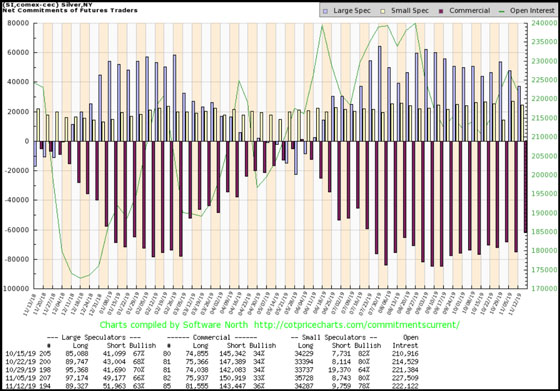 By looking at these charts, the crucial long-term level for silver is the 50 Month Moving Average of $16.45:

There is no coincidence that silver closed on the 200 Month Moving Average (RED LINE) for the past three months. However, the key level is the 50 Month Moving Average (BLUE LINE). The Dashed Blue line is the Strong 15-Year Support Level for silver, which denotes the cost of production for the overall industry.

Thus, I highly doubt silver will fall below this level and remain there for an extended period.

In this last monthly chart of silver, there is another crucial KEY LEVEL shown. The Dashed Black Line was support for the silver price from 2011-2012. But, when silver fell below this support line and the 50 Month Moving Average (MMA), it remained below it since 2013.

With silver breaking above both the Dashed Blackline and the 50 MMA, it is a very positive sign. 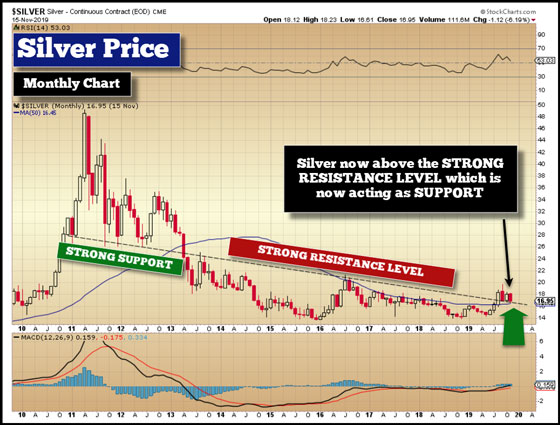 With the silver price right at its 200 Month Moving Average while the broader indexes are 90-130% above their 200 MMA’s, my money is on silver. Again, the smart investor BUYS AT THE BOTTOM and SELLS AT THE TOP.

While silver may continue to consolidate lower over the next few months, it is primed for the next BIG MOVE higher when the Day of Reckoning guts the markets in 2020.

Lastly, here is the monthly gold chart. I believe gold will likely fall back down to the $1,360 level before setting up for the next leg higher in 2020. 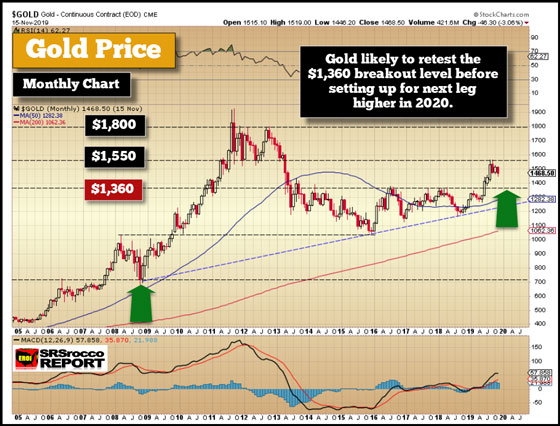 When gold broke above the $700 level at the end of 2007, it quickly ran up to $1,050. Then over the next eight months, it consolidated lower back to the $700 level before setting up for the next stage higher. After gold broke through the $1,360 level July this year, it shot up quickly to the next resistance level of $1,550.

Again, I believe gold will fall back to the $1,360 level to wash out the majority of Commercial Short positions before the next BIG MOVE higher in 2020.

My Thoughts On Precious Metals Manipulation

So, we also shouldn’t be surprised to see the Commercials add more gold and silver shorts when the Fed is now propping up EVERYTHING. But, you CANNOT prop up an economy with paper forever. And, this is the problem the Fed and Central banks will have to deal with in 2020.

In conclusion, gold and silver prices will likely consolidate lower as the BUBBLE MARKETS continue higher by defying gravity and all fundamental valuations. However, when the DAY OF RECKONING FINALLY COMES, likely in 2020, I would make sure I had purchased some gold and silver insurance.