The Global Financial System is now under severe stress. While there have been many factors leading to up to this point, the situation that is unfolding in China and abroad seems to be speeding up the process. Yesterday, the market got a small WHIFF or WOKE up a TAD in regards to a global contagion and soon to be the rapid contraction of the JIT – Just In Time Inventory Supply Chain System.

Even though the Dow Jones Index lost 1,031 points on Monday and another 400+ points so far today, this is mere peanuts when we take into account what is coming in the following weeks and months ahead. Because China accounts for 21% of Global GDP and it supplies a lot of goods, parts, and consumables around the planet, a severe contraction will impact the rest of the world in short order.

But, what if this contagion spreads further to other countries as we see in Iran and Italy?? Then, we are talking about a much more severe systemic problem. And according to my research these past 3-4 days, it’s much worse than I previously thought. I don’t plan on doing any updates on this contagion, as many others are more qualified. However, I will be posting some information as it pertains to the global economy and financial system.

The one thing that I will share is that if you want to wait to prepare for this until some local, state, or regional government comes in and locks down your town, city, or area… then you are behaving UNWISELY. Of course, the situation may not get that bad, but there is nothing wrong with a little insurance, just in case.

At the peak yesterday, Gold was up $40, and silver jumped $0.45. And all this took place when the Dow Jones Index was down 1,000+ points. I believe this is just a preview for much BIGGER PRECIOUS METALS PRICE MOVES to come.

While the gold and silver prices lost most of their gains toward the end of trading on Monday and further today, it probably had to do with profit-taking by the supposed “KEEN” traders who locked in some gains. In time, the idea of locking in gold and silver trading profits will become a distant memory as the world transitions into owning and trading physical precious metals. Thus, physical ownership and trading will replace the game of highly-leveraged paper shuffling.

But, we aren’t t there yet because the market still believes that DEBTS are ASSETS and PAPER MONEY is real.

Today, it looks like the markets are getting another WHIFF of the contagion as the Dow Jones Index is down another 400+ points. Again, this is mere peanuts for what’s in store ahead.

Let’s take a brief look at the monthly gold and silver price charts. 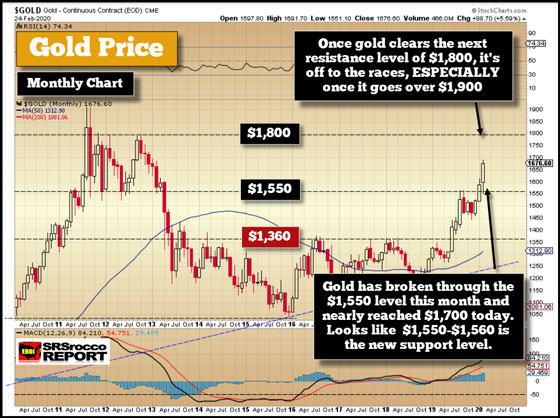 As we can see, gold has broken above the important $1,550-$1,560 level, which will likely be the new support level. Several months ago, I thought we could see gold retrace back down to the $1,360 support area, but it looks like the market had other plans. No complaint here whatsoever.

The gold price could correct lower, or move sideways, but as the global supply chain contagion continues to spread, I believe we are going to see the price move higher. So, the next important level for gold is $1,800. But, when gold finally goes above the all-time high of $1,900, it’s OFF TO THE RACES.

We can see that already taking place in the gold price in the EURO: 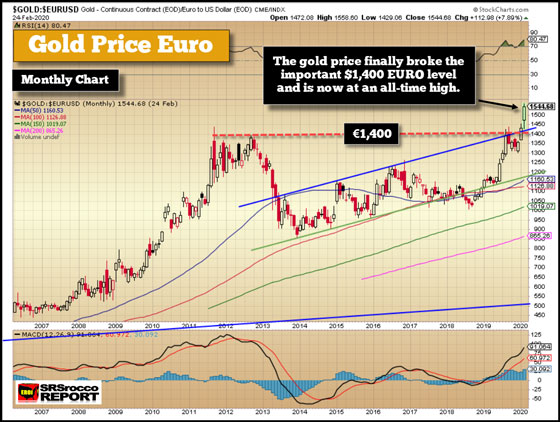 My associate put together a series of charts, and this is one of them. As we can see, the gold price in the Euro finally broke through the seven-year $1,400 resistance level and is now trading at an ALL-TIME HIGH. I see the same thing taking place with Gold in Dollars, and we may see it sooner than later due to the current situation in the markets.

As for silver, there is a TRADING WAR taking place at the important $18.50 Resistance Level. Once silver breaks through this level and closes above it on a monthly basis, I believe it will quickly move up to the next resistance level of $21.50: 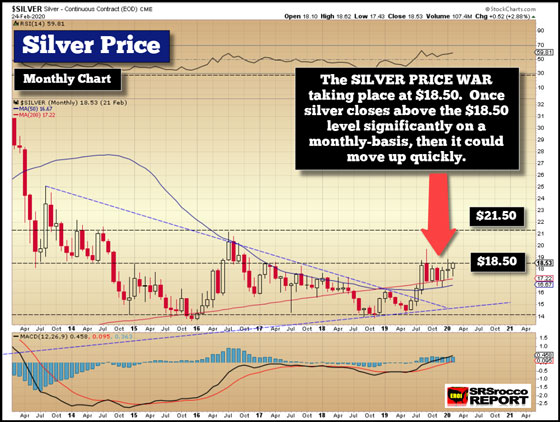 Even though the silver price sold off today, it’s all due to speculative paper trading. Think about it. Would someone want paper contracts worth 50 surgical masks, or would they want 50 surgical masks? Don’t let the paper price of silver bother you. It will come down to how many ounces you own.

Okay, now that I showed you the technical charts based on paper trading, I believe in time physical demand will become the leading driver of price… NOT PAPER CONTRACTS. However, we aren’t there yet. And, if we look at the current COT Report charts, the commercials hold a record number of short positions: 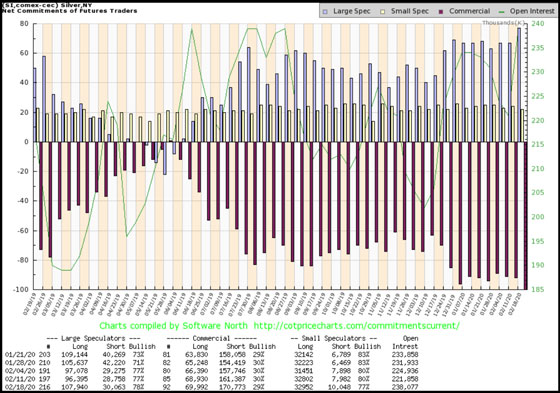 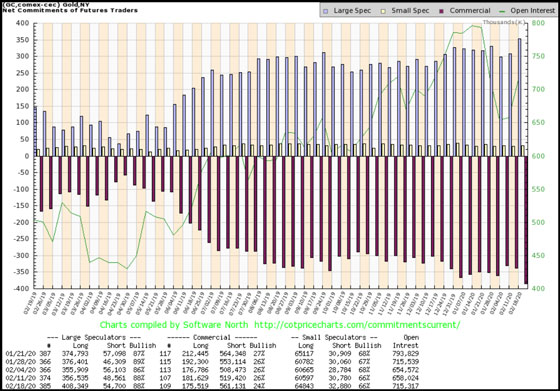 In looking at these charts, we shouldn’t be surprised to see a correction in the gold and silver prices. However, it’s not a guarantee, especially in the present circumstances. Regardless, this is just a short-term setup that won’t matter in the coming months and years ahead.

ALERT: The Precious Metals Heading Into An Entirely New Market

Looking into the future, I see the precious metals heading into an entirely new market, much different than today. My past analysis has based this on our future energy predicament, but it seems that this current contagion is speeding up the process… IN A BIG WAY.

With Chinese oil consumption reported to be down 20% since the early part of February, how bad is it now?? In my recent article, I stated it was likely down by at least 50%, or 7 million barrels per day (mbd): 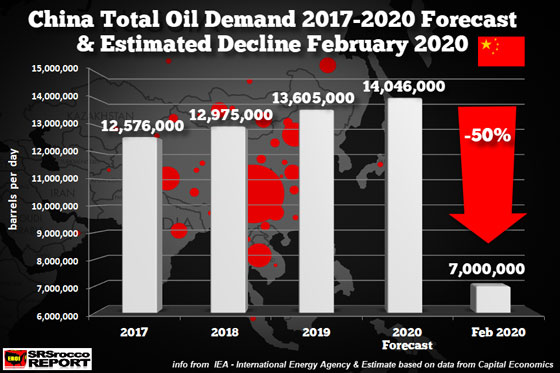 This makes perfect sense when we look at the following three charts from Capital Economics that are circulating in the media: 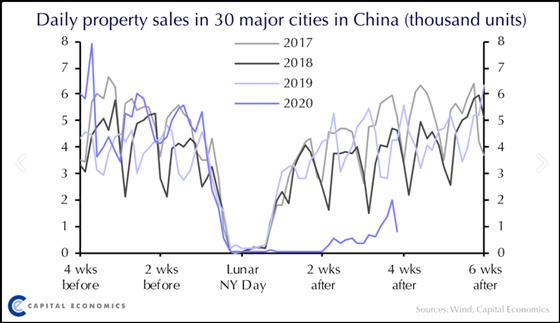 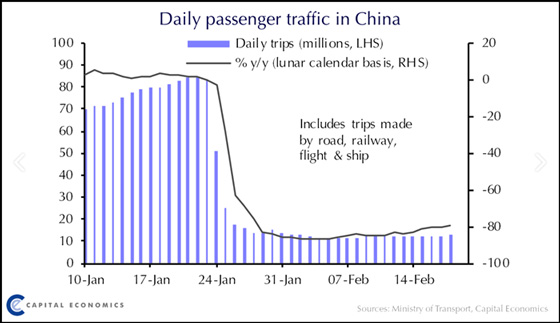 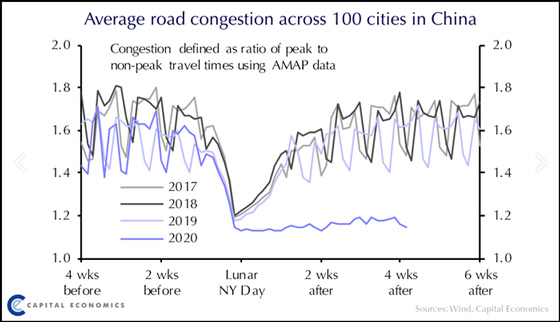 While the Chinese Oil industry may continue to import oil, refine it, and then store it as finished products, the economy isn’t consuming it. So, if the IEA is forecasting that China’s oil demand will be down 435,000 barrels per day (bd) in Q1 2020, I wonder what planet they are receiving their data or maybe what they might be smoking. Again, Bloomberg reported a 20% decline in demand, 3 million barrels per day at the beginning of February. And, if we look at the charts above, China’s daily passenger traffic is still down about 80%.

So, if we conservatively say that China’s oil demand is down 50%, or 7 mbd, even if the country turns everything around in March, there is no way it will be down 435,000 bd during the first quarter of 2020, as the IEA (International Energy Agency) forecasts. Why? Let’s do some simple math:

If we subtract 11.5 mbd from 13 mbd for Q1 2019, that equals a decline of 1,500,000 bd for Q1 2020, not the 435,000 bd stated by the IEA. Now, I don’t believe China consumed 13.5 mbd in January because if you look at the chart above, passenger traffic was also down considerably in the last week of the month. Note, these are just my approximations. Again, even if China’s Oil Industry is importing oil and refining products, the Chinese people aren’t consuming much gasoline, diesel, or jet fuel.

BINGO… outcomes this article today, No Financing And No Demand: Chinese Refiners Run Into Trouble:

Refiners, both private and state, have already reduced their run rates in response to the slump in fuel demand resulting from the outbreak, and now they have deepened these cuts, Bloomberg reported last week.

What happens if the situation in China doesn’t improve in March. PSA, an automobile manufacturer in China, just announced it is extending the shutdown of its auto-plant until March 12th. Even if the Chinese people return to work in March, how many are going to show up?? I doubt China’s oil demand in March will reach anymore than 9-10 mbd at most. If this is true, then total oil demand for China would be closer to 10 mbd in Q1 2020, or 3 mbd less, nearly seven times lower than the forecast by the IEA.

There is no way the current oil price trading at $50.70 (WTIC) has priced in this dynamic. Thus, even if the situation improves in China during March, the current oil price hasn’t factored in a decline of approximately 1.5 mbd off the market in Q1 2020. And what if the situation in China doesn’t improve?? Then we could see an even larger decline in China’s oil demand of 3+ mbd. That should do wonders for the oil price WHEN THE MARKET FINALLY WAKES UP.

So, getting back to the precious metals. What does all this mean?? As I have stated for the past few years, the coming ENERGY CLIFF would destroy the value of most financial assets. While I thought this might be a few years away, the present contagion just might speed the time-table up a bit. If the oil price continues to contract down to the $40s and $30s, that should be the final NAIL IN THE COFFIN for the U.S. Shale Oil Industry… for good.

PRECIOUS METALS ALERT: Be prepared for investors to significantly increase their purchases of physical gold and silver. Demand could go crazy in a relatively short period of time. This is what happens when individuals realize overnight they need something quickly. Here’s a picture of a long line of people in South Korea waiting to get into the supermarket: 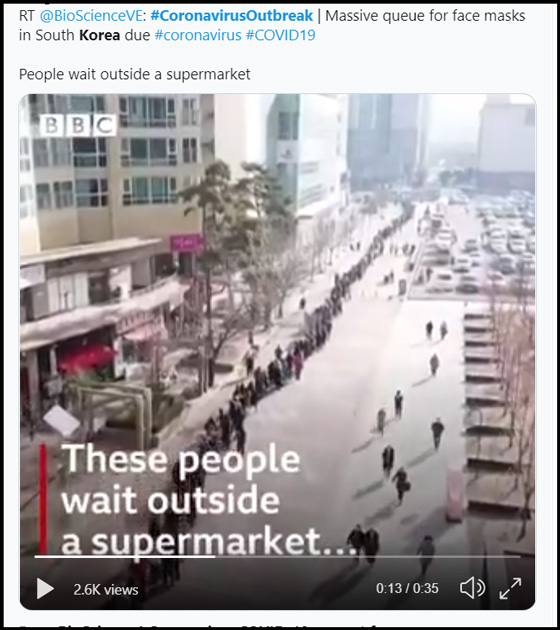 Of course, getting enough food, protective masks, and supplies is the priority, but what happens when financial assets and money become problematic?? People still need to use money, or what behaves as money. I have no idea what the future holds, but if we continue to see a serious contraction of the global supply chain, then it’s very wise to own some physical gold and silver.