Once again, anyone simply watching the gold price on CNBC would be shocked to know just how many people are buying gold.

The Fed, and the cabal of Wall Street Banks it represents, are undoubtedly relieved to have metals prices under control. But they have a serious problem and it is bigger than the gold market.

The disconnect between virtually all paper asset prices and real-world fundamentals has never been greater.

The screen capture below pretty well sums it up: 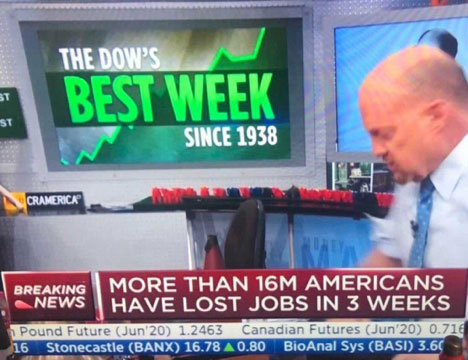 The ponies at the Federal Reserve performed their one trick. They printed $4 trillion and handed it to Wall Street bankers. They galloped in to buy everything bankers needed to sell, including junk bonds, other corporate debt, and stocks.

Despite the rules against outright equity purchases, there can be little doubt the Fed’s largesse is behind the frenzied buying in the stock markets in recent weeks.

There may be rules, but nobody is watching as to whether or not they get broken. The Fed is not required to provide the details of its exploits to anyone. It never submits to an audit.

Nobody in Washington even wants to know exactly where the Fed’s trillions go anymore. The rest of us, however, can make a pretty good guess just by watching CNBC.

When the troubled assets the Fed is so feverishly buying right now go bad, we won’t hear about that either. The important thing, from Chairman Jerome Powell’s point of view, is that he answered the call from Wall Street elites who needed someplace to dump a whole lot of garbage fast.

Our dollars will buy less because trillions of them were printed to buy this waste. That’s how bankers’ losses are socialized and how the Federal government grows far faster than the rate of overt taxation year after year.

The trouble is that Americans can see what is happening. Congress deliberated on sending $1,200 to most, though certainly not all, citizens.

Meanwhile Jerome Powell rushed 10 times that overall stimulus amount through for the banks, untroubled by the need for public debate.

Large and well-connected corporations, like Boeing, are getting a disproportionate share of the free money passed through Congress. That makes plenty of people angry. Many of us know how undeserving these corporate charity cases are.

Boeing remains under criminal investigation for lying about the safety of its newest airliner. People died when some of these jets crashed. This company plowed tens of billions into buying back huge quantities of shares, including boatloads of stock from the same company executives who devised and launched the share buyback program.

The airline manufacturer was wholly unprepared for the rainy day which is now upon us. Hundreds of thousands of honest businesses may fail in the economic collapse now underway. Boeing, however, will not be counted among the bankrupt.

It’s fundamentally unfair, and it is on full display.

Washington, Wall Street, and the Fed are replaying what they did during the 2008 Financial Crisis, only on a much larger scale. People remember those unpopular bailouts for the “too big to jail” banks.

Public anger and a collapse in confidence is a serious problem for the elites running this rigged game.

This brings us back to the cracks which are starting to form in the paper metals markets. Bullion banks could lose control over prices, and it wouldn’t take much given investors’ current level of unease.

The scheme to sell ever larger amounts of paper metal in order to cap prices is getting untenable. The number of investors smelling trouble and standing for delivery of physical bars is rising dramatically.

It’s worth pointing out here that a loss of control doesn’t have to mean paper prices going skyward. It could just as easily mean the prices of paper contracts start reflecting their intrinsic value, which is somewhere closer to zero. That’s what will happen if there are defaults on the exchanges.

Bankers, including Jerome Powell at the Fed, definitely do not want to see demand for physical bars overwhelm the paper exchanges. It’s just the sort of challenge central planners run into when they disconnect markets from reality.