Foodflation is registering at the checkout lines of your local grocery store – and in a bigger way than has been seen in decades. 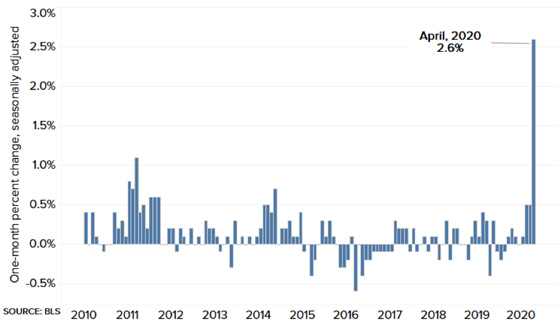 The last time a food shock of this magnitude hit consumers was February 1974. Back then, inflation was just starting to heat up following President Richard Nixon’s de-linking of the U.S. dollar to gold – and ahead of a massive run up in precious metals prices that culminated in January 1980.

Could we be headed for a similar outcome in the 2020s? Many economists think it’s likely we are.

“A return to 1970s stagflation is only a broken supply chain away,” writes Stephen Roach in the Financial Times. “Soaring deficits and debt could compound the problem. For now, no one is worried about them because of a conviction that interest rates will stay at zero forever. But with fractured supplies set to push inflation higher, that assumption will be tested.”

Of course, the current forces driving foodflation at the grocery store are far different in nature from what hit the economy in the 1970s. An Arab oil embargo and wage-price spiral had ensued as interest rates rose relentlessly.

Today, the economy faces an oil glut, a record surge in unemployment, and interest rates near zero with no signs of heading higher anytime soon.

However, things could change quickly in an environment of unlimited Quantitative Easing.

The trillions of “stimulus” dollars injected into the financial system and consumers’ pockets by the U.S. Treasury and Federal Reserve have so far not ignited a broad inflationary trend in consumer prices.

In fact, energy, commercial real estate, and other sectors of the economy have suffered price collapses. April saw the steepest monthly fall (0.8%) in U.S. consumer prices since the 2008 financial crisis.

It’s hard for prices of discretionary goods to rise while consumers remain hunkered down. But they still need to buy groceries! And that’s where inflation is now showing up.

Food supply chains are being disrupted by pandemic fears and government “stay at home” decrees that have forced restaurants to close and driven farmers to take desperate measures just to survive.

Meanwhile, some large meat-packing facilities have been hit with virus outbreaks spread by their largely foreign-born workforces – threatening meat supplies to grocers.

The most dramatic price rises are being seen in beef, pork, poultry, fish, and eggs.

Kroger and other supermarket chains are putting quantity limits meat purchases – just as they previously had done for bottled water, toilet paper, and bleach over concerns that supply chains would not be able to keep up with growing demand for these household staples.

Supply chain glitches have also been showing up in the precious metals bullion market.

The availability of gold and silver coins depends on a smoothly functioning chain of suppliers – from mines, to refiners, to mints, to dealers. Unfortunately, the virus has caused many mines to shutter and some refiners and mints (including the U.S. Mint) to close temporarily.

Many bullion dealers are also struggling despite surging demand for their products. Poorly prepared dealers are having difficulty acquiring inventory and managing exposure to market volatility, costing them tons of customers to better positioned dealers like Money Metals Exchange.

Bullion customers, in turn, are facing elevated premiums for most bullion products. In the long run, though, these premiums may be a small price to pay for the security of being able to own physical precious metals.

There may come a day when surging demand so completely overwhelms the supply chain that physical precious metals become practically impossible to obtain.

Today’s spot prices for gold and silver may spike to previously unattained levels overnight… or over the course of months and years as currency debasement drives precious metals gains in fiat dollar terms.

If the 1970s are a guide, then investors can expect few investments other than precious metals to perform well. In a stagflationary environment, the stock market would be expected to trend down in real terms (though natural resource sectors may perform relatively well). Bonds would lose value in real terms as ultra-low yields fail to compensate for even slight upticks in inflation.

But first, the deflationary depression scenario must be ruled out. That will likely happen as the economy reopens state by state, country by country, unleashing pent-up demand and increasing money velocity.

That has created an extreme distribution of winners and losers based on who happened to be positioned where when the economic lockdowns hit. Some have lost everything, while others (including mega billionaires like Amazon founder Jeff Bezos) have seen their wealth grow at an accelerated pace.

Those who have had ample cash reserves have at least been able to weather this recent storm. When the winds shift toward higher rates of inflation, however, cash will be trash, and hard money – gold and silver – will once again be king.