Due to investor fears stemming from the global contagion, demand for Perth Mint silver and gold bullion products surged in April. According to CoinNews.net, the Perth Mint’s gold bullion sales in April were the highest since the website started collecting data in February 2013, while silver bullion sales were in second. 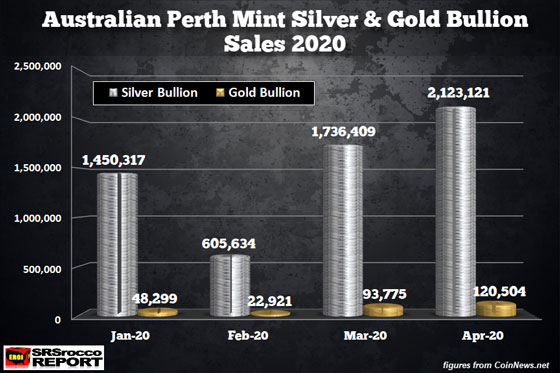 For the first four months of the year, the Perth Mint sold 5.9 million oz of silver bullion products and 285,500 oz of gold bullion. Compare that to the total U.S. Mint Silver Eagles sold during the same period of 10.7 million and 323,500 oz for Gold Eagles.

It will be interesting to see what the level of gold and silver bullion products will be for the rest of the year as investors become more concerned about the financial system as the Fed and central banks continue printing money hand-over-fist.

In 2019, total investment silver billion demand was 186 million oz (Moz), according to the data in the Silver Institute’s 2020 World Silver Survey. The highest physical silver investment demand reached was 300 Moz in 2013, due to the huge sell-off in the silver price.