HOUSTON WE HAVE A PROBLEM: Dow Jones Index Totally Disconnects From The Employment Data 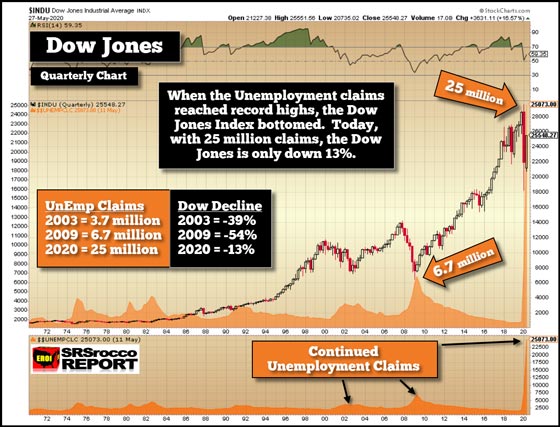 The continued unemployment claims are shown in both the bottom of the chart and also behind the Dow Jones Index candlesticks. As the unemployment claims reached peaks, in 2003 and 2009, the Dow Jones Index bottomed. I can assure you the HUGE RED CANDLESTICK with the wick nearly reaching down to 18,000 level, that wasn’t a BOTTOM. Bottoms, shown in the past, last 2-3 quarters.

Sure, the Fed will continue printing money to prop up the stock market and economy, but at some point, GRAVITY and the LOUSY FUNDAMENTALS will kick in.

I stated that I would put out a new video over the weekend, but due to research in other projects, I will try to get it out in the next 1-2 days. I will show that it wasn’t any COINCIDENCE that the Dow Jones Index corrected near the 18,000 level.

Regardless… there’s a lot of damage continuing to take place in the economy that will only make matters worse in the second half of the year. Even though Americans are now driving more, going back to work, restaurants, and shopping… the economy is seriously broken. It will likely never return to the same level we enjoyed last year.