Key Levels to Watch for Gold’s Next Move

A breakout above the trading range could quickly send gold prices to $1,900/oz – where they would challenge their former all-time highs set in 2011. 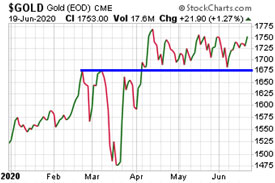 Seasonally, the month of June tends to be weak.

It wouldn’t be surprising if short sellers in the futures market managed to drive prices back down toward the bottom of the range one more time.

That said, gold prices are closer to breaking out than breaking down from this high-level consolidation. And given that this year has been extraordinarily atypical for all markets, we wouldn’t necessarily expect typical summer doldrums to afflict precious metals.

A breakout above $19.00 and then above $20.00 would finally put silver on the map of mainstream investors – especially since it would likely coincide with record-high gold prices.

With silver being more affordable to retail buyers of limited means, and more vulnerable to supply shortfalls, we expect it will outperform gold during the coming public participation upleg.