Even in the competitive hunting/shooting community, few enthusiasts know about an arcane rifle known as a "double trigger shotgun." Essentially, it's a double-barrel shotgun having a trigger for each barrel.

This was an early day's design with the triggers located inside the trigger guard, back to front. It was possible to press both triggers at once, causing a double discharge, though for the most part this was not a good idea – since it caused twice the recoil, and was hard on both the shotgun and the shooter – especially if not anticipated.

Though this essay is not about shotguns, but rather silver, the above concept provides a perfect analogy for what I believe is in store – a double discharge for both silver demand and price in the reasonably near future!

More than gold, silver is vulnerable to supply shortages due to its crucial role in our high-tech society. Consider the emerging technology of 5G phones. Most phones on the market today are not equipped to handle 5G technology, but as the global trend shifts towards integrating 5G infrastructures, it will not be long before new phones are produced to accommodate it.

And these new phones will need silver: approximately 88 Million ounces of it. Do not underestimate the demand for silver just because its supply now appears to be plentiful.

As much as we hear the gold story, it truly is silver that keeps the economy running. Oil may be far more important than silver, but that does not negate the fact that we need silver to continue to operate in today’s world. The banking system cannot run without computers as there is silver in their computers. And we cannot exchange information without the silver as it is required in all communication landlines or wireless.

Silver is more critical than most people ever consider because it is ubiquitous. It is everywhere, in a very small amount. Every day, we handle little silver fragments, and we never even think about it—food for thought. 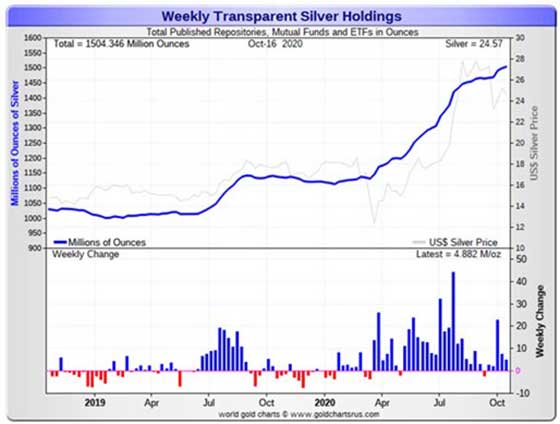 As the above chart of Silver EFT Inflows shows, investor demand for silver is voracious.

Industrial users with a variety of future metals' supply needs are already "taking positions" in mining producers to assure these needs. We have seen this with Tesla (nickel, lithium, cobalt), other auto manufacturers (copper, zinc), and inevitably will at some point, I believe, with silver).

This kind of background positioning usually goes on quietly, with a company either buying shares of a producer or providing cash infusions for their ongoing operations, or even taking an offtake stake in an exploration operation's ounces/pounds in the ground.

The primary silver producer universe of less than two dozen is so tiny, that a company like Apple deciding to swallow ALL them up would be less than a blip on its bottom line! Thus, pressure is now being placed on the other of these double silver demand triggers.

In 2001, a rumor that Russia, producer of most of the world's palladium, might stop producing, caused Ford Motor company to aggressively stockpile this critical metal needed for manufacturing their catalytic converters near $1,100 per ounce - a price level that was not to be exceeded for another 20 years.

Soon thereafter, Russia started exporting again and the price collapsed to $140/ounce, forcing Ford to take a $1 billion write off on its stockpile.

Monetary demand is now starting to exceed that of industry. David Morgan again:

At some point, enough people wake up and understand that their currency is becoming worth less and less, which means a tipping point will be reached. It could be achieved with an additional one-percent of the investing/saving public, or it might be done with another Berkshire Hathaway purchase or equivalent.

This year, 2020, has seen more silver bought as – money, investment, safe-heaven, or hard assets than is used in industry, and we are just warming up for the final round of the most significant move into things of value that the world has ever witnessed.

There is an infinite demand for “money” because under the current system the debt can never be repaid, since the interest to pay the debt needs to be created. Money represents a lot of things- stored energy, stored labor, security, future planning, retirement funding, etc.

Most think of “money” as security for their future. When enough people see that they don’t have any money and come to realize they have a substitute that is actually a fraud, the run to real "honest" money (precious metals), will overwhelm the markets. 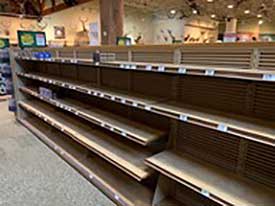 If you're a firearms enthusiast, you understand the need to keep a few boxes of ammo on hand for target practice and otherwise.

But if you've been ignoring the demand issues bearing down on supply – especially this year – then you've probably been confronted with empty shelves for months! Where even a small supply does exist (often with a 1 box limit) some customers have resorted to wearing a disguise in order to make a second purchase!

Don't be foolish and wait for this happen to you when trying to get silver.

Act on silver (and gold) for your financial insurance plan now, because when silver's double-trigger (price-supply) demand explosion takes place, you don't want to be standing around empty handed!