Get Ready for a Post-Election ‘Fed Wave’ of Inflation

As accusations of voting irregularities mount, President Donald Trump’s legal team is descending on Pennsylvania and Georgia as well as multiple battleground states that have been called by media outlets for Joe Biden.

It will be an uphill battle for Trump to get to 270 electoral votes. As of this writing on Thursday morning, the final outcome of the presidential election remains uncertain.

One thing that is now certain: Voters denied Democrats the “blue wave” many pollsters and pundits had been forecasting.

Instead of a Biden landslide, a takeover of the Senate, and an expanded House majority, Democrats will instead have to share power with Republicans. The promise of divided government – one way or the other – caused stock market investors to breathe a sigh of relief.

Wall Street rallied yesterday as a post-election “fear trade” into precious metals failed to materialize – although metals are up sharply today.

The political scenario where Democrats would gain the power to ram through massive tax hikes, crush the fossil fuel industry, socialize healthcare, pack the courts, and impose a nationwide virus lockdown appears to be off the table – at least for now.

Republicans are on track to retain a small majority in the Senate and, surprisingly to many political observers, pick up some seats in the House.

If Republicans stand their ground, then they can block the most far-left legislation, though they won’t have the numbers to do much else.

The prospect of continued gridlock in Washington raises other risks for the economy and for markets that investors may be overlooking.

If Congress, the Senate, and the President can’t come to terms on another fiscal stimulus package, then the burden will fall squarely on the shoulders of the Federal Reserve to ramp up new monetary stimulus schemes. 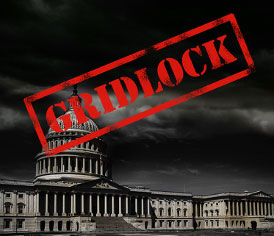 When all else fails, the politicians’ work-around to gridlock and dysfunction in on Capitol Hill is to outsource its policy objectives to the Fed.

Since the coronavirus pandemic hit, Fed officials have pumped trillions of dollars into financial markets and provided lending backstops for corporations.

Fed Chairman Jerome Powell is now being urged to create a financing vehicle for state and local governments.

Powell has been pleading with politicians to do stimulus in the conventional manner – commit to spending trillions of dollars into the economy, borrow those trillions into existence, then sell piles of new debt to the central bank to complete the circle.

Had Democrats gained complete control over the legislative and executive branches, they would surely have obliged. They would have also pursued aggressive tax hikes on what they define as “the rich” to try to raise revenues in the conventional way.

Wall Street seems to believe that the economy will now be spared from any major tax hikes over the next couple years. Perhaps.

But it won’t be spared from exponentially growing government debt or the Federal Reserve’s exploding balance sheet – after all, that happened under Trump this year in a big way.

The Fed’s Takeover in Washington Is Nearly Complete

A “Fed wave” is building – bigger and more unstoppable than any political campaign. Its full consequences for markets and the economy are difficult to project. But by its own stated objectives, the wave of Fed currency printing and depreciation will bring with it higher rates of price inflation.

Investors who are banking on a low-inflation economic recovery during the next administration are loading up on stocks.

Those who are more skeptical about the ability of central planners to sustain a bull market built on artificial stimulus are diversifying into alternatives.

In particular, commodities and precious metals represent real value in an environment where valuations on paper assets are artificially stretched at best – completely disconnected from reality at worst.

Of course, the only vote that counts in investing is the markets. And if the market fails to show a post-election or contested outcome trend toward safe-haven buying of gold and silver, then precious metals bulls will have to await another potential catalyst for higher prices.

Long-term holders of gold and silver can be confident that over time their ounces of hard money will gain value versus depreciating U.S. Federal Reserve notes.

A wave of Fed-induced inflation is coming. The only question is how big it will be.