Silver Setting Up for a BIG Move Following Fed

Bank of America analysts stated that this week’s meeting is “one of the most critical events for the Fed in some time.”

The Fed faces mounting pressure to intervene in the bond market as yields continue to rise. It will likely reiterate its commitment to keeping its benchmark rate near zero and vow to continue buying at least $120 billion in bonds per month.

Critics of Fed chairman Jerome Powell’s easy-money stance are warning that monetary and fiscal policy are too loose.

Rising fuel and food costs have economists concerned. Conveniently for Fed policymakers, however, their “core” inflation indicator excludes those components.

The traditional inflation hedges of gold and silver haven’t generated much upside confirmation so far in 2021 – at least not in the futures market where spot prices are determined. But bullion demand from investors who are concerned about inflation risk has been quite robust.

Will another round of intense physical buying follow the Fed’s latest pronouncements on rates and the economy?

There is likely nothing on the Fed’s boilerplate that would dissuade investors from buying precious metals. But spot price volatility in either direction is certainly possible in the near term.

Silver in particular appears to be winding up for a big move.

The silver chart shows prices currently being constrained by the 50-day moving average. The trading range is narrowing underneath it. 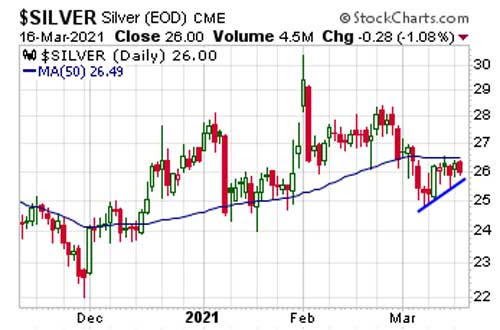 One of two outcomes appears to be imminent: Either a big breakout above the 50-day moving average OR a sharp selloff to re-test the $25/oz level and perhaps lower-tier support.

Anyone who follows the silver market closely knows that prices can move dramatically in any direction at any time – regardless of fundamentals or the longer-term trend that may be in force.

Silver put in a major bottom one year ago as broader panic-induced market liquidation brought futures prices to as low as $12/oz – and crude oil futures to an even more absurd (though brief) negative price structure.

That was a truly epic low – the sort the occurs perhaps once in a generation. As further confirmation of the historic nature of the 2020 bottom, silver became cheaper versus gold that any point in our lifetime – and has since significantly outperformed gold on the rally that followed.

Silver has continued to show relative strength versus gold through the consolidation period that has occurred over the past few months. That should give precious metals bulls confidence that the major bull market off last year’s lows remains intact.

Silver has ridden a broader run-up in commodities as prospects for post-lockdown economic growth improve. Industrial demand for the white metal also stands to pick up from the trend toward electrification. Silver is used in virtually all electronics and stands to benefit from accelerating growth in electric vehicles and solar panels in particular.

Silver’s attributes as a monetary metal will also factor into its likely price rise over time as the value and status of the U.S. dollar erodes.

The Dollar’s Road to Ruin

The world’s reserve currency post-World War II is being abused like never before by its issuer. The federal budget deficit along with the Federal Reserve’s balance sheet are spiking to levels that would have been unthinkable just a few years ago.

The CBO estimates that over the next 30 years, Uncle Sam will have to come up with $61 trillion in interest – and that’s assuming rates only move up modestly.

The CBO bluntly warned lawmakers that the current pace of debt expansion will “increase the risk of fiscal crisis – that is, a situation in which investors lose confidence in the U.S. government’s ability to service and repay its debt, causing interest rates to increase abruptly, inflation to spiral upward."

The end game, the CBO warns, could be the replacement of the dollar as the world’s reserve currency.

Neither U.S. officials nor globalist bodies such as the International Monetary Fund want to see a disorderly unraveling of the world currency order. Plans for a transition to a global digital currency approved by the Fed and managed by the IMF are in the works.

Needless to say, central planners have no intention of reinstating sound money by backing their new digits with precious metal.

But gold and silver will continue to play they role they always have throughout the ages – serving as solid stores of value regardless of which fiat currencies come and go.

For now, the major currency against which precious metals are measured is the U.S. Federal Reserve note. The more it is debased, the higher and longer the bull markets in gold and silver can be expected to run.