Going for the Gold: Building a Winning Investment Portfolio

While Olympic athletes in Tokyo are going for the gold, investors are going for anything that might provide positive real returns.

In a yield-starved environment where bonds and cash are returning less than inflation, there are no guarantees. But there are certainly opportunities outside of fixed income instruments.

Investors who try to sprint their way to success risk hurting themselves in the process. Going for fast-moving penny stocks or cryptocurrencies can lead to ruin just as quickly as it can lead to riches.

Building a winning investment portfolio is more akin to training for a decathlon. Having a complete package of skill sets means you don’t have to win every contest to come out ahead in the end.

Sometimes it’s not about winning the top prize. In challenging market environments, the name of the game may be to preserve capital – to not lose purchasing power.

That’s where going for the gold (and silver) can pay off compared to going only for paper gains in financial markets.

Far from weighing down a portfolio, physical precious metals provide more ways for it to achieve an investor’s goals – especially during times of rising inflation pressure and economic uncertainty.

The gold market started off trading for the month of August on an uncertain path near-term. Prices are currently being pinched in between the 50-day and 20-day moving averages. 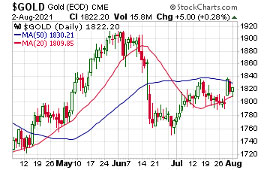 This type of compression can lead to a significant directional move once prices break either to the upside or downside.

Back in mid April, prices traded in between tightening moving averages until they broke out to the upside, leading to a multi-week rally.

A gold market breakout would add to the value of Olympic gold medals, though they are actually comprised mostly of silver.

For the Tokyo Olympics, gold medals contain only 6 grams of the yellow metal as surface plating, according to the International Olympic Committee. They contain 550 grams of silver.

Based on current spot prices for gold and silver, an Olympic gold medal sports an intrinsic value of about $800.

Of course, Olympic medals have sentimental and collectible value. But that value is subjective and difficult for the market to determine in a transparent way. Anyone who ventures into the collectible space risks overpaying for something whose attributes may be overstated by a seller.

Bullion investors are more concerned with melt value than with sentimentality. They avoid dealing with peddlers of collectible medallions and supposedly “rare” coins that carry inflated prices and huge bid/ask spreads.

To win a race, you first have to show up for it. Those who hold overpriced gold and silver specialty items rather than ordinary bullion products are in an entirely different contest than the one measured by spot prices.

They could find that they aren’t able to realize any winnings in gold and silver bull market because the premiums they paid failed to move higher in tandem – and because in less liquid markets “sell to dealer” prices tend to be much lower than “buy from dealer” prices (the spread).

If the goal is ultimately to beat inflation and win real purchasing power gains over time, then holders of physical precious metals need to play the long game. Markets are inherently unpredictable from day to day.

But from year to year and decade to decade, it is entirely predictable that the U.S. government, together with the Federal Reserve, will continue to debase the currency. They are currently doing so at a more rapid pace than in a generation, and there is a real risk that inflation will continue accelerating to the upside the years ahead.

Sometimes gold and silver prices will lead and sometimes they will lag other inflation indicators. In the end, however, precious metals markets will reflect the full extent of the U.S. dollar’s depreciation.

The losers in this unceremonious process will be those who hold their wealth in dollars and dollar-denominated debt instruments. The winners will be those who convert their fiat currency units into real assets – and keep their eyes on the prize.