We regularly take calls from Money Metals Exchange customers who have been taken for a ride by one of the many rare coin (or numismatic) salespeople who seem willing to say just about anything to earn their sales commissions.

Numismatic dealers advertise gold and silver and touch on legitimate concerns over inflation, government debt, and the likelihood of another financial crisis.

Those who call in seeking to make an investment in bullion get switched into a very different product – illiquid and overpriced “rare,” proof, and commemorative coins. And they are faced with large discounts when attempting to sell down the road.

Only coin collectors with specialized knowledge should dabble in the markets for numismatic coins. Investors who simply want gold and silver as a hedge against inflation and uncertainty will want to select an ethical dealer, such as Money Metals Exchange, which sells lower premium bullion coins, rounds, and bars.

Here are three of the most common deceptions used by peddlers of "rare" coins...

This falsehood keys on President Franklin D. Roosevelt's Executive Order #6102 which ordered citizens owning more than 5 ounces in gold coins to turn in the "excess" coins for dollars and made "hoarding" gold a crime.

There was an exception made for truly rare and collectible gold coins (many garden-variety coins numismatic salesmen sell today might not fall under this definition, by the way).

Only months later, FDR stuck it to anyone who cooperated by turning in their gold when he devalued the dollar by almost 50% and reset the official price of gold to $35 per ounce.

At that time, the dollar was formally backed by gold. 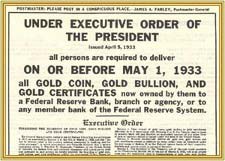 Buyers of rare coins hoping to avoid
government confiscations are faced with
immediate confiscation of some of their wealth
by the rare coin dealers themselves.

Forcing the public to turn in its gold made it possible to expand the money supply in an effort to counteract deflationary pressures and fund massive new federal government spending programs.

President Richard M. Nixon slammed shut the gold window in 1971, so money can now be printed without this important restraint.

In other words, central planners no longer "need" your gold to pursue their inflationary policies.

Today, if the government wanted to confiscate our wealth (because simply stealing it via inflation wasn't doing the job quickly enough), we would expect officials to take whatever was the easiest to get their hands on – and/or jack up taxes. Financial assets are not only easily located, but also easily confiscated electronically, unlike physical gold and silver securely stashed away.

Under two federal laws – one passed in the early 20th century and another from the 1970s – the U.S. government claims the power to seize any private asset whatsoever in times of national emergency or war. Nothing is automatically exempt.

The truth is that government reporting requirements are virtually identical for numismatics and bullion.

Only in extremely rare instances are buying or selling bullion gold or silver reported to the IRS by dealers. The primary exceptions are purchases using more than $10,000 in actual cash or sales of very large gold and silver bars – bars that can be used for delivery on a futures contract.

In the overwhelming majority of transactions, dealers are NOT required to file any kind of report.

What rare coin salesmen "forget" to mention is that any capital gain you enjoy in selling a rare coin is still something that you, as an individual taxpayer, must report on your tax return – whether or not a 1099 information return was filed by your dealer.

Tax obligations are the same for both numismatic and bullion coins. Gains on coins held longer than one year are taxed at the collectibles rate, which is 28%. Short-term gains are taxed as ordinary income. 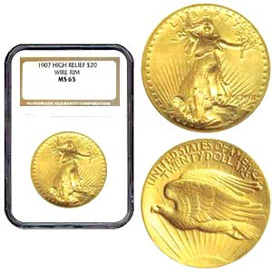 Each numismatic coin type, each year, and
each condition level has its own sub-market,
making it especially difficult for anyone but
extremely serious collectors to make
knowledgeable decisions.

Far from delivering greater actual, bankable profits than bullion, the opposite is usually the case with numismatics.

The outrageous buy/sell spreads so common with numismatics (and proof coins) severely eat into the profit potential associated with owning them.

It is extraordinarily common for unsuspecting rare coin buyers to be suckered into paying twice the melt value for coins which are the opposite of “rare.”

Because the coins command very little actual premium versus melt value when it is time to sell, the owner may have to wait for the metal price to double, just to break even.

The best way to avoid being scammed is to find out what the buyback price would be on a coin if you were to sell it back later that day. For reference, bullion coins, bars, and rounds, offer a spread which is generally less than 15% (and can be under 5%).