Why Isn’t Gold Going Up with Inflation

Many voices in the gold community are making a simple point. Look at the prices of oil, copper, and other commodities. They are skyrocketing. The mainstream explanation— shared by Keynesians, Monetarists, and many Austrians—is that the cause of this skyrocketing is the increase in the quantity of what is called “money”.

The price of gold has not been going up. The inference is that it should be going up (note the word “should” is very dangerous in trading). The default assumption is there can only be one possible explanation: price suppression. We aren’t going to debunk, yet again, this conspiracy theory. Our definitive proof is in our response to Ted Butler. Nor address, yet again, the fact that the dollar is not money, nor is it an objective measure of the height of assets, most especially gold.

Our point today is to present the reason why the price of gold has not gone up with the price of oil and other commodities.

The Non-Monetary Causes of Inflation

The prices of commodities, and manufactured goods alike, have been rising due to nonmonetary forces. This is difficult to grasp from inside the mainstream paradigm, which holds that purchasing power is intrinsic to money. If prices are up across the board, then people think the currency has necessarily gone down.

But, of course, there can be a case when goods genuinely become scarce. That is, a case when the money has not gone down, when it really is prices that have gone up.

For example, suppose the government bore down on every kind of productive activity from drilling and mining, to shipping and trucking, even to employing people. And the government outright stopped much of it. And what it did not stop entirely, it restricted and limited to a fraction of its previous level.

The above precisely describes what the government has done. And not only in the US, but all over the world. Trade wars and rising nationalism have played havoc with supply chains. Companies have been forced to seek local substitutes for better and/or cheaper goods made by firms in jurisdictions that their government has taxed, restricted—and threatened to do worse. In addition, it has forced companies to hoard components lest they be caught without a critical ingredient and be unable to complete their products.

The automakers have run short of the chips they need to make cars.

So called “green” policies have stopped production of the most useful forms of energy, while at the same forcing industries to use that no-longer-produced-locally form of energy. For example, natural gas in Britain. Add trade war and nationalism to the toxic mix, and Britain is struggling to find enough natural gas to import. Prices of energy and even food will skyrocket.

Lockdown whiplash compounds this problem. Shipping and logistics all over the globe is messed up in numerous ways, some obvious and some not. Containers and even ships are often not in the locations where they are needed. So manufacturers are piling up goods in warehouses, unable to send them to customers. This is the obvious part.

One non-obvious distortion is that so many containers have gone to the ports in Los Angeles, that every truck chassis has a container on it and every inch in the terminal areas is stacked to the maximum with containers. The ports are not allowing trucks to offload an empty container, even if they are picking up a full one. So containers stack, trucks are idled. And the problem grows.

Contributing factors in this mess include local zoning regulations that allow trucking lots to stack only two containers high. Also some blame goes to a law that prohibits non-union trucks (including owner-operators) and therefore stops trucking capacity from coming in to help work off the extra container volume. And green regulations have disincentivized trucking companies from buying more trucks. It goes on and on. As does the crisis.

Along with the price of in-demand goods that come on ships, the cost of sending a container across the ocean has skyrocketed.

Did we mention that government central planning of ports and transportation infrastructure has restricted capacity, and interfered with efficiency in many other ways? For example, slowing the adoption of new technologies in the ports. The net result is that the government has added many useless ingredients to shipping and logistics, the cost of which is included in many of the things we buy at retail.

Anti-pipeline policy has limited the flow of oil from Canada. Too many ships waiting offshore LA has meant they are drifting or attempting to anchor outside the limited number of anchor slots. One such attempt severed an oil pipeline. This will not only further reduce the flow of energy to where it is needed, but probably serve the anti-energy demagogues and politicians with a ready-made excuse to ban the next pipeline that comes up for permitting.

What Your Dollars Are Buying More of Now

The dollar is buying as much as it did before. It’s just that many of the things it is buying are not things that consumers know about, or want. For example the dollar is buying lots of extra idle time for each container, and lots of extra handling. It is buying an above-market “rent” by union trucking shops, who secure this uneconomic rent by laws against nonunion truckers. It is buying extra salaries and fuel burned by ships who are not idle, they are burning fuel to remain in position too far offshore for their anchors to reach the bottom. It is buying all sorts of extra labor, tanker trucks, permits, road taxes, and administrative costs to move energy by whatever channel is least constrained at the moment, in a world where constraints are shifting around and growing.

It is paying for warehousing of chips and other critical components that used to arrive justin-time. It is paying for food and shelter and clothing and Xboxes for millions of people who once worked, but now find it convenient to get paid not to work.

None of these issues is a loss of value of the dollar. The problem is not inside the dollar, it is not that the dollar has shrunk. The problem, contra Milton Friedman, is nonmonetary. Friedman famously declared that “Inflation is always and everywhere a monetary phenomenon in the sense that it is and can be produced only by a more rapid increase in the quantity of money than in output.” But in this case, it’s nothing to do with the quantity of dollars.

The True Cause of Inflation Right Now

The cause is a barrage of production-killing regulations. If the government wanted industry to produce less, to make goods scarcer, to drive up the cost of living and force down the standard of living—then it could not have devised a more effective plan. And it gets away with it all the more easily, because people blame the Fed and the purchasing power of the dollar.

The purchasing power of the dollar makes a perfect scapegoat. If this is the root cause, then what does every voter, wage earner, and retiree on fixed income do? He blames greedy corporations, greedy bosses, and greedy COLA committees for not giving him a raise. He thinks this is a grand conspiracy by which the rich get richer, at his expense.

What About the Price of Gold and Non-Monetary Inflation?

Meanwhile, those who bought gold based on the promise that gold keeps up with inflation are also upset. Not at greedy bosses, but at greedy bullion banks. Whom they are convinced are selling gold short, in order to keep the gold owners from realizing their just profits.

But, seen in the light of the above discussion, that promise of gold and inflation is not even wrong. Of course, the government-imposed costs embedded in everything from oil to imported bicycles have nothing to do with gold. Gold is not shipped by ship.

Gold is money, and it is the only way to measure the dollar. The price of the dollar, measured in gold, was 17.16 milligrams on Friday. The price of the dollar is not falling, as government-created shortages are not a monetary phenomenon. That is not to say, that it cannot become a monetary phenomenon. If this crisis forces enough companies to go out of business and default on their debts, then it could cause a banking solvency crisis. That could cause people to dump dollars, to hold money. Money is what you hold when you don’t want to be a creditor. Money is gold.

In the meantime, the price of gold has gyrated back and forth several times in the last five months. The peaks are around 18mg and the valleys around 17. Along with these price changes, there has been a corresponding change in the fundamentals as this chart shows. 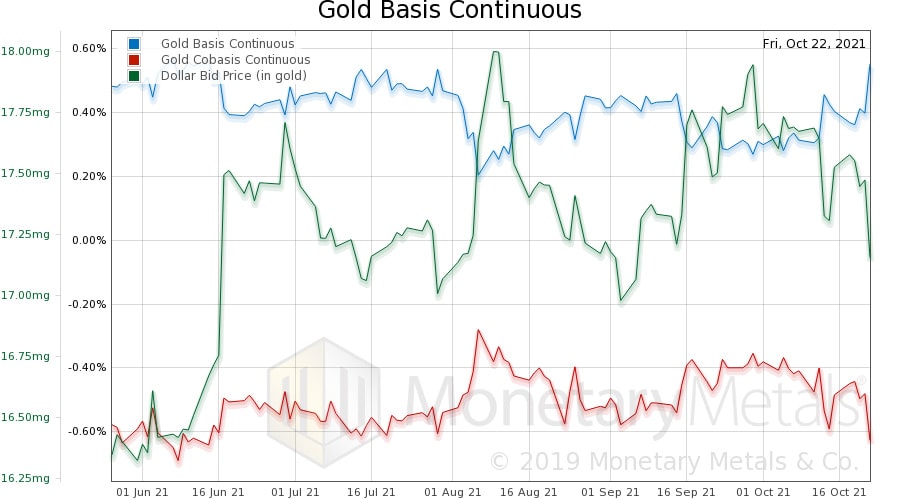 These are pretty subtle changes, but it shows that lower dollar (i.e. higher price of gold) goes with less scarcity. And higher dollar (i.e. lower price) is causing greater scarcity of gold.

In other words all this price action, which may be upsetting to those trying to trade gold to make dollars, is just leveraged speculators positioning and repositioning themselves in the futures market.

In silver, the pattern is similar with a key difference. 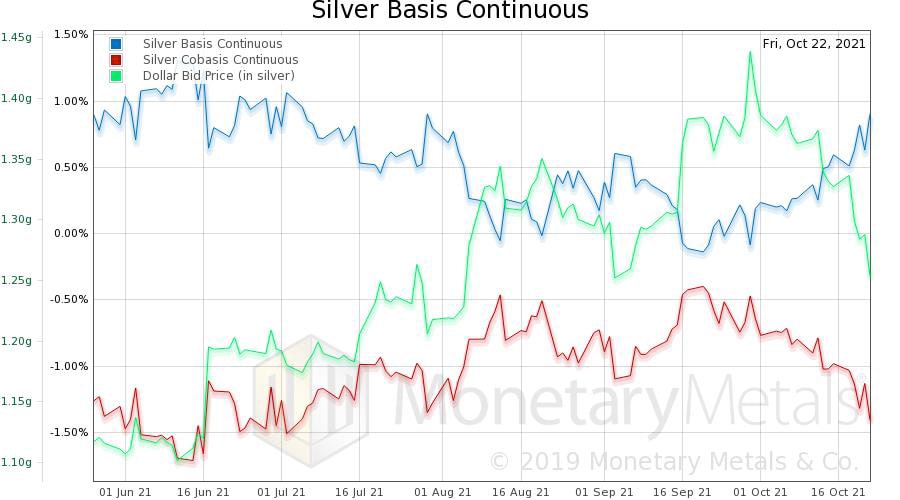 There is less pronounced movement within a range, though it’s there. And of course the magnitude is bigger as a percentage. The low in the range is about 1.2 grams to 1.44 grams, or 20%. Compare to 1mg in gold, which is 6%.

The take-away is that there really is not much of a fundamental change in the market through this. There just is not the shortage, much less panic, that some gold analysts proclaim. Nor the massive dumping of mass quantities of futures (this would cause a big leap up in the cobasis).