Prepare Now for "Shock and Awe" Inflation – or Suffer the Consequences…

The Producer Price Index (PPI) is a measure of inflation expectations by industry producers. Most investors keep an eye on the Consumer Price Index (CPI).

However, the CPI gauge is not only incomplete, it is, as U.S. Global's Frank Holmes likes to say, "backward looking" …and, as Graham Summers pointed out, "gimmicked to the point of fiction." 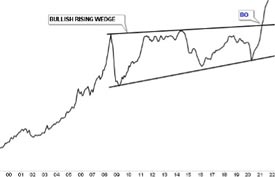 The PPI is forward looking. Rambus Chartology at shows that this logarithmic chart mapped out the biggest rise in inflation since 1982 – only two years after the first $50 silver "bubble" burst.

The PPI’s rising wedge began with the 2008 near-collapse of the global economy and by mid-2021 had broken out of a 12-year wedge formation to the upside.

Investors and ordinary folks who hope to protect their purchasing power would do well to reflect on this chart, build an understanding of it into their decision-making, and accept what it tells us as a long-term talisman for wealth-preservation.

Most of the commodity indices, across all subsectors, e.g. the CRB, DJP, GNX, XOI as well as GYX, an industrial metals index), are now surging to the upside.

For the last 12 years or so the PPI has built a bullish expanding rising wedge with the last reversal point being the 2020 crash low. The breakout from that massive bullish rising wedge consolidation pattern came this year in March... strongly suggesting that inflation is really just getting started and will last for many years to come. Keep in mind there will be corrections along the way because nothing goes straight up or down in the markets... Always remember big consolidation patterns leads to big moves which is clearly evident on this combo chart.

The current round of inflation that started in Argentina, Lebanon, Turkey – and the U.S. – as a tame, presumably short-term phenomenon has the potential to grow in the months and years into an all-consuming, systemic generational-destroyer of wealth, both accumulated and productive capacity yet to be.

Is this the fate mandated upon those in the West who fail to recognize and effectively deal with it?

Just because gold and silver don't always respond on cue to inflationary warnings, should you ignore several thousand years of global history to the contrary and go about your business?

Odds are that sooner than we might expect, the metals, along with a surge in premiums, and questionable retail availability, are going to join the parade.

Try not to lose heart and falter in your gold and silver acquisition plans, or worse yet, sell out when you get a chance to take "a tidy profit."

Try not to let fear cause you to freeze in the headlights or, just as bad, drive in the wrong direction.

There are certain things you can know in advance. For example, if you shut down an economy by force, you will wreck investor confidence in the future... we’ve known for a year and a half that we would likely see inflation in this country without precedent in our lifetimes...price increases in components and materials can be absorbed for a few months but not over the long haul. They devour profitability like a fast-moving cancer.

Combine that with labor shortages and you have major problems. Wages keep being bid up, faster and faster, but still not in a way that increases the purchasing power of the money workers receive. That’s because consumer prices are chasing the producer prices closely behind.

The trajectory here is striking. This is not a stable rate of high increase. It is an increasing rate of high increase. Forecast this out over six months, compounded, and you are looking at something truly horrific. Already these are the largest increases in wholesale prices on record. Keep in mind that this is getting worse.

Fear is a protective mechanism. It's how nature preps us to deal with a sense of danger that at the moment may not be fully understood but which seems "a bit off."

An old saying tells us that our success in life is often less about the gravity of the issue faced than how we respond to deal with it.

Cus D'Amato, who raised boxer Mike Tyson from age 13, and became his coach, is reputed to have said about fear, “Emotions, particularly anger, are like fire. They can cook your food and keep you warm, or they can burn your house down."

So consider the proven historical narrative – across cultures and millennia – expressed here as a viable financial analogy for what we're facing just in front of the windshield: Gold and silver "in hand" can help "cook your food, and keep you warm."

Ignoring the signals coming from the unease and fear we're all going through right now, and failing to prepare for the consequences, could one day "burn your (financial) house down"!