Over the past year, the Federal Reserve Note “dollar” has been losing value at an alarming pace as reflected by broad price level increases.

Manufacturers had to bear the brunt of the inflation surge in 2021.

The worst may be yet to come for consumers as producers pass on their costs to wholesalers and retailers.

Some politicians, such as Senator Elizabeth Warren (D-MA) and others whose policy preferences are largely responsible for the inflation problem, have now taken to inflation demagoguery – crusading against producers for raising prices while peddling conspiracy theories about “price gouging” and collusion.

Other supporters of President Joe Biden, concerned about his plummeting job approval numbers, are trying to downplay inflation.

Republicans, of course, are trying to exploit “Bidenflation” as a winning political issue heading into this fall’s election. They note that American families will have to pay an additional $3,500 on average just to maintain their standard of living in 2022.

Hardly anyone in Washington wants to talk about the real elephant in the room, though. The Federal Reserve’s easy money policies combined with massive handouts and fiscal spending – the primary drivers of inflation – have been championed by both Republicans and Democrats.

Fed Chairman Jerome Powell was appointed and confirmed by Republicans. He has now been reappointed by a Democrat. He will soon probably be confirmed for another term with bipartisan support in the Senate.

Consumers and investors should therefore expect more of the same.

Although the Fed intends to push up interest rates, likely beginning in March with a quarter-point baby step, it is way behind the curve. The central bank would have to impose a massive series of hikes starting immediately in order to have any hope of getting out in front of rising price levels this year.

That isn’t going to happen. The powers that be in Washington and on Wall Street wouldn’t stand for it.

The currency will continue to lose value. The only question is how rapidly.

Yet over that same period, the U.S. Dollar Index, which measures the currency against a basket of foreign currencies, actually gained value.

This anomalous dollar “strength” was caused by competitors such as the euro losing value even more rapidly.

Although gold is not a component of the Dollar Index, it does often behave as a currency. It is, after all, sound money – sought by individuals for wealth protection and even central banks as backing in reserves.

In the paper markets, traders may hastily hit the “sell” button on gold and silver when they see the U.S. Dollar Index strengthening. That’s one big reason why precious metals underperformed last year.

For the same reason, though, gold and silver could get a boost in 2022 if the Dollar Index begins to trend lower along with the value of the currency itself. 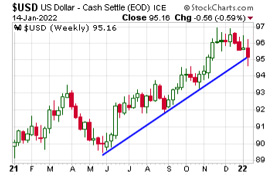 More significantly, it appears to have breached an uptrend line that had been in force since last June.

Dollar bears will be looking for confirmation of a breakdown in this week’s trading with any additional move lower. It could just be the catalyst gold and silver markets need to break out to the upside.