Supported by Idahoans and groups such as Sound Money Defense League, HB 522 would permit – but not require – the State Treasurer to hold some portion of state funds in physical gold and silver to help secure state assets against the risks of inflation and financial turmoil and/or to achieve capital gains as measured in devaluing Federal Reserve Notes. 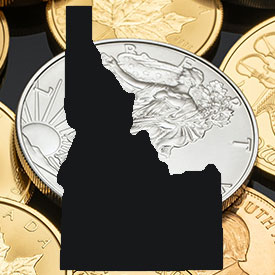 Speaking on the house floor, Rep. Nate noted, “Idaho’s current investments are comprised almost entirely of debt instruments with a negative real yield, plus they have a default risk. That’s risk without reward. We need to give our Treasurer another tool in the toolbox, the option to hold gold and silver, to protect taxpayer funds.”

The State Treasurer currently has few options for holding, managing, and investing Idaho’s “idle moneys.” Due to statutory constraints, Idaho’s reserves are invested almost exclusively in low-yielding debt paper that carries counterparty risk while its value is diminished by inflation.

In a recent Idaho Statesman column, Stefan Gleason, president of Idaho-based Money Metals Exchange, explained that “the Idaho State Treasurer’s office today has upwards of $10 billion in assets under management – the value of which is rapidly bleeding away through negative real interest rates.”

Jp Cortez, policy director of the Sound Money Defense League, said, “Inflation has reached every Idaho home to the tune of at least 7%, which means that the real annual rate of return for Idaho taxpayers on its $10 billion in ‘idle moneys’ is deeply negative, perhaps greater than $500 million.”

HB 522 adds the authority to hold physical gold and silver directly and in a manner that does not assume the counterparty and default risks involved with other state holdings. HB 522 bill does not grant any authority to buy stocks, futures contracts, or other gold-based proxies or financial instruments. There are at least four depositories in the region that would be eligible to hold Idaho’s gold and/or silver.

“An allocation to physical gold and silver fits squarely within the objective of protecting Idaho taxpayer funds against financial risks and the monetary metals would logically be included in a list of safe investment options,” said Gleason. “Gold and silver can provide a hedge against inflation, debt default risks, and stock market declines – and have historically boosted investment returns while also reducing volatility.”

House Bill 522 can be heard before the Senate State Affairs Committee as early as next week.

The Sound Money Defense League is a public policy group working nationally to promote sound money policies, including reaffirming the constitutional role of gold and silver as money.