Unpacking the Narrative of how Russia is going to change the global monetary system.

There is a Narrative about Russia and how it will change the monetary system. Many analysts in the gold community are promoting this story. There’s just one problem with this Narrative. It is like how Michael Crighton described the Gell-Mann Amnesia Effect, stating that the newspaper is full of stories explaining how “wet streets cause rain.”

The basic premise of this Narrative is that Russia will create a new gold standard, the dollar will crash, and of course gold will go to the moon.

Author Terry Goodkind, in his Sword of Truth series, wrote about a set of Wizard’s Rules. The Wizards First Rule says that people will believe something because they want to believe it's true, or because they're afraid it might be true.

The gold community certainly longs for gold to go up to $100,000. And anyone in the West is afraid of the collapse of America—or at least Pax Americana. That’s why the story of the impending collapse of the dollar and rise of the gold-backed ruble resonates so broadly. It appeals to both greed and fear.

Our goal in writing this article is to help people understand why this Narrative offers a false hope/fear.

How is the Ruble Doing?

The Narrative starts with the fact that Russia’s central bank is now buying gold from Russian commercial banks, at a price of 5,000 rubles per gram. 5,000 rubles is worth $58.31 as of market close on Friday, April 1. Let’s pause here to look at a graph of the price of the ruble.

Last October, the ruble was around 1.4 cents (yes, it was a toilet paper currency even long before the Ukraine war). It slowly slid to 1.3 cents—which is a loss of 9%, by the way! Then it crashed to 0.66 cents on March 7. Since then, it has bounced to a high of 1.2 cents before leveling back down to 1.1 cents. Some analysts are trumpeting that it recovered its previous level. As of market close on Friday April 1, it had not.

Anyways, back to the Narrative. In global markets, a gram of gold is worth $61.89 (as of Friday’s close). In other words, the central bank is paying 6% below the market price (the discount was greater when this was announced).

We have looked for a primary source, but cannot tell if Russia is forcing the banks to sell at a discount—i.e. looting them—or if he is helping them by providing a bid. The latter is plausible, as everything Russia exports must go at a discount in order to lure buyers to risk sanctions by the US government.

For example, Russia is selling its oil at a big discount. Here is a chart (from Neste) showing the spread between the European standard crude oil Brent and Russian Urals oil. 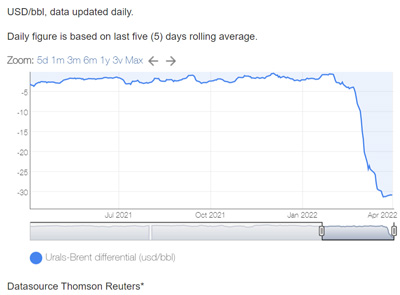 Russia has no choice but to sell its oil
at about $30 below the market price.

Russia is in a Bind

Now we come to Russia’s gold. Here, it has an additional problem. Russian gold is no longer accredited as “good delivery.” We could not find data on the magnitude of the discount on its gold, but for the same reasons as with oil, it must be substantial to induce buyers to take the risks.

We are not experts on the Russian economy, but we would guess that a sudden 30% haircut imposed on a quarter of its economy would have a substantial impact.

We are not saying that the world—especially Europe—would not be devastated if Russia shut off the supply of oil and natural gas. German industry is already planning for the contingency of shutting down manufacturing operations. We are saying that it would be equally, if not more devastating, to Russia.

Picture each side having a firm grip on the other’s throat (we could think of another part of the anatomy which is less appropriate to mention in polite company).

What Makes a Reserve Currency?

Now we get to how “wet streets cause rain”. The US dollar is the world’s reserve currency—so the Narrative goes—because oil is priced in dollars.

We must firmly insist that rain causes wet streets, and reserve currency status causes oil (and everything else) to be priced in dollars.

So, what does the concept of priced in mean, anyways? Does it merely mean which currency is remitted? Or which is used to determine the price, which is used in economic calculation? Let us drill deeper into this distinction because it is an important one.

Suppose a neighborhood kid offers to mow a homeowner’s lawn. He says that as payment, he wants a box of ice cream sandwiches. This box sells for about $8, which happens to be the minimum wage in the homeowner’s state. Cutting the grass will take about an hour. The deal seems fair to the homeowner, so he hires the kid.

Quite the opposite. The value of the service offered by the kid is determined in the prevailing market for labor. It's $8. Yes, dollars. The parties simply agreed on remittance of something else—something worth $8.

In the end, Russia can demand payment in ice cream sandwiches. Or rubles, or even gold. And it will get the dollar value of Brent crude, which is $104.75. Minus the current discount, also calculated in dollars, of about $30.75.

In other words, Russia will get $74. It can get this remitted as ice cream sandwiches, or rubles. But either way, it will get $74 worth of those things.

Russia has no power to alter the numeraire used in these calculations. You would find it easier to persuade 7.5 billion people to all move to New York City this year. Or to get the entire Internet to switch to a new protocol.

The Desire for Rubles

It also has no power to make people, or governments, increase their desire to hold rubles. If they are obliged to pay Russia $1 million worth of rubles for delivery of oil, then they will hold a million dollars until a millisecond before remitting payment, and then buy however many rubles trade for a million dollars at that moment. The value of the ruble will be no different than if they remitted dollars, and it was a Russian bank doing the buying of the rubles.

Here is an article from outside the goldbug community, India. It notes that for Indian exporters to be paid in rubles, they would rely on an Indian banking system solution that would fix the rupee to the ruble (the article correctly notes that the fix would have to be dynamic).

What currency would they use to determine the proper exchange ratio between rupees and rubles? The US dollar. And what is driving these Indian companies to seek this solution? Fear of default by their Russian customers.

So, what is Russia trying to accomplish, in demanding that Europe remit rubles for Russian oil?

The Narrative asserts that this forces buyers of Russian oil to first buy rubles. But it doesn’t work this way. To see why, let’s return to the story of the enterprising lawnmowing kid. Is he pushing up the price of ice cream sandwiches, by making the homeowner buy ice cream sandwiches?

No. What would have happened, if the homeowner paid him the standard $8, is that the kid would have gone to the store to buy the ice cream sandwiches himself. So why would he insist that the homeowner do this for him?

The kid is too young to drive to the store himself, and perhaps his parents won’t drive him (or don’t allow him to eat so much ice cream). He is getting the homeowner to do something for him, that he cannot do for himself (or would cost him much more, such as taking an Uber).

Sanctions have impaired Russia’s ability to trade the dollars for rubles in the market. Russia is (partially) locked out of the market. So, it gets Europe to do that trade for them.

In order for the ruble to rise against the dollar, people would have to change their preference from holding dollars to holding rubles. Is this happening, or likely to happen? We will drill deeper into this question, in Part II of this article.