Could a Red Wave Cool Off the Retail Bullion Market?

Americans will vote in the midterm elections next Tuesday. The latest polling suggests that a “red wave” is building, and Republicans may win the majority both in the House and the Senate. The election results will have implications for all markets – and that includes precious metals. 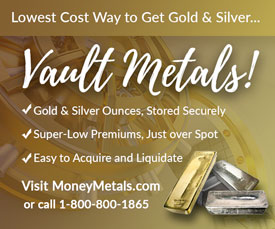 Mass psychology is one factor. Confidence in U.S. institutions has been in decline for several decades. However, when we see a marginal restoration of confidence, it can impact physical market demand for bullion.

Accordingly, should Republicans win big next week, red-hot bullion demand could cool off for a period of time.

If the red wave fails to materialize, however, that could be viewed as confirmation the country will continue barreling down the wrong track. In that event, it is safe to say bullion investors will be inclined to keep stacking gold and silver more than ever.

It is less certain as to exactly how much confidence they will get from a Republican Congress. It's all about expectations and whether politicians immediately start walking the talk.

There are some things a new Congress can do. One of the first battles will be over the federal budget and the debt ceiling. Americans will find out pretty quickly whether enough genuine conservatives are in position to actually hold the line on deficits and debt.

Balancing the U.S. budget involves making some very hard choices. That is why most politicians have viewed taking a hardline position on the budget as political suicide.

Goldbugs must also temper their expectations based on what Congress cannot do. Major legislative reforms would have to wait for a president who is oriented toward sound money principles. Overriding a presidential veto requires two-thirds vote in both houses, and nobody is expecting a red wave big enough to deliver such a margin.

Congress cannot do anything about the $31 trillion in debt already on the books or the mushrooming interest payments associated with that debt.

Interest rates are just one of a whole universe of market drivers outside the purview of Congress.

They won’t decide whether Russia escalates the war in Ukraine, or if there is a currency crisis in the UK. They cannot prevent a black swan type event in financial markets, such as the failure of Deutsche Bank or Credit Suisse.

Next week’s election is bound to impact the metals markets.

Should Republicans win big, investors may expect that a degree of fiscal discipline would be restored and that inflation will come down. That could mean a temporary slowdown in demand for coins, rounds, and bars.

However, any sky-high expectations for the new Congress are unlikely to be met.