John Ray III oversaw the bankruptcy liquidation of Enron when the giant energy trading firm collapsed in an inferno of fraud and malfeasance in 2001.

Last week, Ray was appointed to handle the unwinding of the cryptocurrency exchange FTX . He had the following to say, and it's a lot given his experience:

The failure of FTX is still reverberating through the crypto markets. The collapse of FTX took nearly 20% off the total value of all cryptocurrencies, almost overnight.

Many obscure tokens lost essentially all of their value. The carnage may go on for a while as the deadly combination of collapsing token values coupled with plenty of leverage takes its toll.

Sam Bankman-Fried, the politically connected founder of FTX, was inadvertently honest about a fundamental problem with many (most?) of the cryptocurrencies now being traded.

In an April interview with Bloomberg, he described a token as a “box” which only has value because people keep putting money in it. When the Bloomberg interviewer observed he was essentially describing a Ponzi scheme, Bankman-Fried admitted there was a “depressing amount of validity” to that.

The collapse in crypto prices over the past year, crowned by the implosion of FTX, should finally put an end to at least one dangerous claim. Bitcoin most certainly is not “digital gold.” 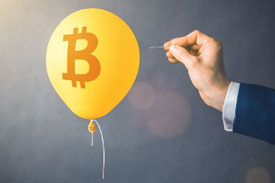 The comparison has always been silly. Bitcoin lacks thousands of years of adoption and use. It isn’t tangible, durable, and beautiful. None of the confidence underpinning the value in Bitcoin and many other cryptos is intrinsic, as it is in a gold coin or bar. Their value, therefore, can go to zero.

The con artists and bureaucrats may yet kill off most cryptos by destroying trust and adoption.

The collapse of FTX and its affiliate businesses is a lesson in exactly how that might happen.

High profile fraud is, unfortunately, a recurring feature in the crypto markets ever since the twenty-something owner of Mt. Gox got caught nearly 10 years ago swindling the clients of his exchange.

The Bitcoin price cratered following that debacle. It has since rallied magnificently. But it has not yet overcome this major challenge.

It is a box which has value because people keep putting money into it. If people ever stop, the value will disappear. In order for Bticoin and other cryptos to have enduring value, they will need widespread adoption and use beyond being a speculative asset.

There are plenty of honest people developing bitcoin and trying to build a better world.

The appalling collapse of FTX symbolizes the shift in industry leadership from heroes like Satoshi Nakamoto to scoundrels like Sam Bankman-Fried. Satoshi built Bitcoin as a decentralized and incorruptible digital asset, beyond the reach of central bankers and politicians.

Bankman-Fried has no interest in the principles which motivated Satoshi. He spent his time and his millions currying political favor and posturing as an altruist.

The FTX scandal was very bad news for cryptocurrency investors. The regulation which is likely to follow will be worse.

The idea behind regulation appears to be for Wall Street Banks to gain unfettered access and control over the cryptocurrency marketplace. People should expect a scheme similar to what was built around gold and silver futures trading, with similar outcomes, including dishonest price discovery.

The FTX exchange’s fraud-fueled implosion conveniently paves the way for progressive politicians, many of who were lavishly supported by Bankman-Fried, to piously ride to the industry’s rescue.

Gary Gensler, chairman of the Securities and Exchange Commission, made his career by turning a blind eye to massive fraud in gold and silver trading when he chaired the CFTC.

Gensler met with Bankman-Fried several months ago to discuss working together on rules. And FTX hired Mark Wetjen, another discredited CFTC Commissioner, as head of policy and regulation.

Bankman-Fried appeared to be taking a page from Bernie Madoff’s playbook. Madoff was cozy with regulators. He sat on advisory committees for the SEC and had a working relationship with officials there. Perhaps that is why the agency ignored complaints which outlined the Madoff fraud in fine detail.

Bitcoin has potential, but not as a substitute for gold. And not as a government-regulated get-rich-quick asset for people to gamble on in Wall Street’s rigged casinos.