NFT Insanity: No One Should Be This Stupid!

Do you remember a man named Vignesh Sundaresan? You don't? Here's a clue. Maybe you remember him from his moniker "MetaKovan."

Vignesh Sundaresan is a co-founder of bitcoin ATM provider Bitaccess. But he's most famous as the "crypto whale" who bought digital art in the from of a Non-Fungible Token (NFT) at Christie's auction for $69.3 million.

So what in the heck is this NFT thing?

NFTs hit the mainstream in 2017 with CryptoKitties, a digital game that allowed people to buy and "breed" virtual cats with crypto. So naturally, nerdy video game developers went berserk over NFTs.

NFTs enabled gamers to win in-game animations like digital shields, swords, or chariots. Then transfer these cartoon trinkets from one game to another, and sell these in-game NFTs in blockchain marketplaces—sometimes for impressive sums.

Then NFTs found their way into the art world, hyped by celebrities who didn't know much about crypto. For example, Lindsay Lohan made her own NFT based on an image of her face.

Hours after she put her NFT (face) up for sale, she tweeted, "Bitcoin is the future," even though her NFT lived on Ethereum. First, Lohan sold the image for over $17,000. Then it was quickly resold for $57,000.

But it gets much, much worse.

In December 2020, Twitter founder Jack Dorsey created a non-fungible token (NFT) from his first-ever Twitter post. He turned a static image of his five-word tweet into a digital file; voila, his NFT was born. This sold for $2.9 million.

Twitter co-founder Jack Dorsey created
an NFT from his first-ever tweet,
which sold for $2.9 million.
In an auction a year later,
the highest bid was $280

NFTs raise money for suspicious projects that end in monstrous failures or sudden "rug pulls," where anonymous founders make off with everyone's money.

That means he raked in $4.45 million. Roughly 1,000 of these sold for six times the asking. One card showing Trump standing in front of the Statue of Liberty (holding a torch) is currently listed at $24,000. 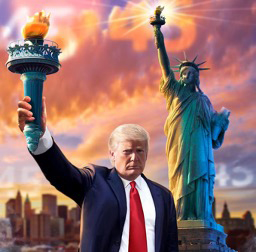 NFT / crypto tokens are the sickest form of speculation, mania, and a financial scam built around non-transparent technology and phony populism.

It's a scam based on Ponzi payouts fueled by cult-like recruiting. It's a pyramid scheme.

So NFT is like crypto in general. If you sell your NFT and profit in dollars, it's only because someone else bought it at a higher price than you did. And then they expect to do the same, and so on ad infinitum.

Every dollar that comes out of NFT crypto schemes needs to come from a later investor putting a dollar in.

So to presume NFT or crypto investments function as a store of value, we must suppose an infinite chain of greater fools who keep buying these assets at any irrational price and into the future forever.

This is where these financial instruments leave the realm of reason and enter the cult-like world of MLMs and quasi-religious movements.

As we know from the history of other popular delusions, they are usually based on the madness of crowds and cannot sustain themselves. Instead, NFTs and crypto are games of musical chairs where participants gamble on timing the market, hoping to be kept from holding the bag when the music stops.

After the meltdown of Celsius and Sam Bankman-Fried's FTX, these scams are the last thing we need.

Just last week Mark Zuckerberg went to Capitol Hill begging lawmakers not to regulate crypto too harshly just because of all the fraud.

Zuckerberg said, "Congress should let the NFT-powered Metaverse flourish because it will add $3 trillion to global GDP by 2031."

Keep this in mind: Facebook bet billions recently on building this Metaverse and lost half a trillion dollars this year.

I heard someone talking about NFTs at a Christmas party last weekend. I told them about Jack Dorsey's first tweet NFT losing 99.9% of its value.

Then I showed him a photo of a rooster on a gold coin.

I will take the gold rooster any day over the CryptoKitty NFT.