Warning: 3 Billion People Covet Your Gold... Is China Buying Up All the Gold?

It has been said gold goes where it is best appreciated. Rapidly rising wealth across Asia has Easterners in Turkey, Iran, Vietnam, and China buying gold, saving gold, and using gold as money.

But for most Americans and many Europeans, gold is no big deal. What's the explanation for the East's love of gold and the West's nonchalance? Importantly, what does this mean to you?

The answer is found in the histories of failed governments, shifting borders, changing flags, and collapsed currencies. As governments crumbled over the centuries and currencies became worthless, confidence in gold and silver as true wealth was always the last man standing. The descendants of those destroyed societies understand gold as no others can.

The United States and China are standout examples of polar opposite views toward gold.

The United States, a nation existing for only 238 years, has not suffered centuries of calamities. Our history has often been violent and divisive, but we've held onto our borders, our flag, and our form of government. And, we still call our money the dollar, although it's no longer backed by gold.

China is one of the oldest civilizations, with 3,000 years of brutal, tribal conflict, as feudal dynasties fiercely outfought and outlasted each other for a couple of hundred years here and there.

Chinese monetary history includes copper, gold, silver, and one curious innovation. Over a thousand years ago, China was the first civilization to print money. The adventurer Marco Polo carried Chinese paper money home to Europe, which in turn introduced hundreds of years of inflationary disasters and currency failures throughout the world.

When the Communists came to power in 1949, they forbade private gold ownership. Only in 2003 did China lift that ban, for keen economic and political reasons. China feared America's failing dollar, while studying America's sleepwalking ignorance and disparagement of gold and silver.

The Chinese government had seized an opportunity no other nation on Earth recognized. It very quietly began fortifying its economic empire with gold. 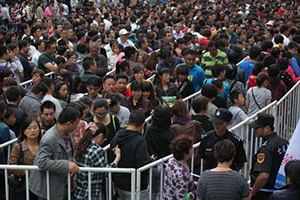 Citizens get regular reminders that taking gold and silver out of the country without permission is illegal, reminding smugglers to think twice before losing their heads.

The most important of the holiday gift-giving seasons is the Chinese New Year. Gift shopping is easy. No kitchen gadgets for mom or ugly ties for dad – parents and children alike want, and get, gold and silver. Analysts say purchasing for that holiday is so heavy it influences international supply and pricing.

Asian buyers instinctively rush to stock up whenever prices fall. They “buy the dip,” and they shop for bargains. Long waiting lines to buy gold are not uncommon. 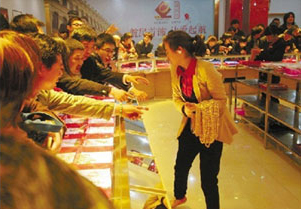 Eleven years ago, Chinese could not legally own gold. Today they openly discuss news and regulations regarding gold and silver.

Chinese workers don't have IRAs. Instead, jewels, gold, and silver are customary stores of wealth.

And they are perfect for showing off. Fashion shows feature Asian supermodels in gold-laced dresses and lingerie. Last July, China hosted The International Gold & Jewelry Beauty Queens pageant. Yes, there was even a swimsuit event!

The U.S. and China, like all nations, are secretive about their official gold dealings. The last credible audit of America's gold was in 1953, despite recent political and public pressure to open the books. Critics want answers to two questions: how much is there and who really owns it?

The last official notice of China's gold holdings astounded the financial world. In April 2009, China announced it held 1,054 tons, almost double what was previously known. That lifted China into fifth place among nations holding gold. That headline helped boost gold prices in the aftermath of the financial crisis of 2008.

Gold Is Flowing Out of the West and into Asian Vaults

China's announcement was a shock wave to other central bankers, who were known to be selling gold. Most of the world's central bankers took the hint, quickly reversed course, and became buyers also. Nervous governments (such as Germany) began asking the U.S. to return their gold.

Besides importing mountains of gold, China is a major mining producer, buys gold and silver mines around the world, and builds massive vaults to hold it all. It pays with gobs of unwanted dollars.

China developed the largest physical gold market in the world, the Shanghai Gold Exchange (SGE). In fact, the SGE opened for international trading last week with a ceremony led by China’s central bank chief who raved about the importance of gold ownership. China has made it clear it wants control of the world’s physical gold market.

The U.S. is widely thought to have much less than it claims, while China is fully believed to have much more than it admits.
Tweet This

Gold watchers today make two important comparisons: China is known to be buying gold, while the U.S. is strongly suspected of selling its gold. And the U.S. is widely thought to have much less than it claims, while China is fully believed to have much more than it admits.

China now seems wary of the paper money it invented over a thousand years ago.

Yes, gold goes where it is best loved and most appreciated. That means China has backed up the truck.

If you worry who might ever buy your gold and silver, talk to the folks with thousands of years more experience with failed governments and failed currencies than we Americans have. Be assured half the world's population, over three billion customers, happily stand in line to buy your gold and silver with their unwanted dollars. But don't necessarily expect to get those precious metals back!