Four Pressing Questions about Gold, Silver, and the Dollar 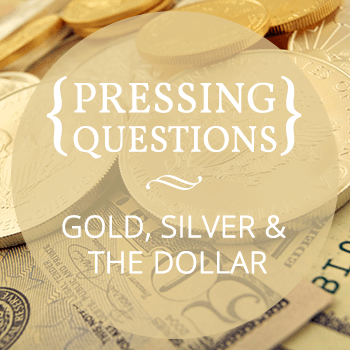 Our precious metals Specialists enjoy addressing the many excellent questions posed by our customers on an individual basis, but we like to share some of the most common questions and answers in a more public way...

Most investments are denominated in U.S. dollars. If the dollar falls through the floor, do all our investments suffer the same fate? Can investments held in brokerage accounts be protected?

The reality is that all assets in your brokerage accounts, including foreign stocks and foreign currencies and even gold, will be priced in dollars. But that doesn’t mean they are dollar-based investments. The assets are simply valued in dollar terms for accounting and tax purposes. The dollar price reflects the exchange rate on any given day for that foreign asset or ounce of gold.

Unless the dollar becomes worthless, we should always be able to assign some dollar value to non-dollar assets. If the currency of measurement collapsed to zero, then any investment that derives any value from a source other than that currency would theoretically go to infinity.

U.S. stocks would still have worth, since corporations have real assets on their books (although many would have difficulty selling their products in the kind of economy that might accompany a dollar collapse). Stocks, foreign currencies, and gold would continue to have an exchange rate with other currencies.

U.S. bonds, though, would have no value. Investors wouldn’t be willing to pay anything for a worthless income stream, so a U.S. bond would be worth nothing in terms of any currency.

(1) Can I bring gold and silver coins out of the country? (2) Do I need to declare them to Customs if so? (3) How many of them (or how many ounces) can I bring?

The U.S. government says you must declare to Customs all cash or “monetary instruments” that amount to more than $10,000. This reporting requirement does not apply to non-monetary assets such as gold jewelry and would technically not apply to bullion rounds or bars, either, because they are not legal tender.

How it applies to gold coins isn’t entirely clear. According to the Federal Reserve, gold isn’t money at all! But one-ounce Gold American Eagles DO have a legal tender value of $50. You could theoretically take 199 American Gold Eagle bullion coins out of the country without hitting the $10,000 threshold. We wouldn’t suggest it, though. If privacy is a high concern, then stay well below the $10,000 limit or convert your wealth into something that clearly isn’t a “monetary instrument.”

What do you think might happen to gold owners if the USA returns to the gold standard?

There are a number of scenarios in which a return to a gold standard in some capacity could occur. But under just about any scenario, the gold price would have to go much higher than it is today. A gold price of roughly $10,000 would be required to back all the currency now in circulation. That’s because reported U.S. gold reserves today account for less than 15% of the monetary base. (In 1980, gold prices rose to sufficient heights to back the currency 100%.)

It’s possible that gold could be quickly reinserted into the monetary system during a global financial crisis, and Asian countries are slowly but surely moving in that direction regardless. However, we believe the most likely path is that gold and silver steadily reassert themselves over time as money on their own and trudge their way toward de facto 100% backing of the currency.

When purchasing gold, do you recommend American Eagles, Krugerrands, Maple Leafs, or bullion bars or rounds?

We think it is most important to keep premiums as low as possible while keeping an eye on your ability to sell when the time is right. Therefore, among actual coins, we generally recommend Gold Maple Leafs and South African Krugerrands.

Gold American Eagles are a bit higher priced, but, as the most popular and widely distributed bullion coins in the U.S., they may be worth the modest additional premium if you don’t yet own any.

With silver, privately minted rounds and bars are also preferable when compared to the much more expensive government-minted bullion coins. Silver rounds and bars enjoy a wide market and should prove easy to sell to virtually any dealer in the country (We hope you would sell to Money Metals Exchange, though!)