Operators of Evolution Market, a so called “darknet” site specializing in illicit drugs, turned off the servers last week. About $12,000,000 in customer bitcoin vanished along with the website. A note, purportedly from the owner (and including lots of typos), has been making the rounds online:

Due to unforseen events I decided to close down Evolution Marketplace. We want to thank you guys for your effort and help making this the most profitable and popular marketplace. This wasn’t an easy decision but due to other marketplaces getting shut down and the forum going downhill I decided to cut my ties and exit with an eight figure profit.The millions from evo will be divided up amongst the mods a few admin and members. Since this is such an abundance of money I may consider buy ins from former evo members in exchange for 1k bitcoinis. I’ll be around for a short period of time before permanently moving to the caribbeans, I hope you guys understand.

Became popular after authorities shut down the Silk Road marketplace in 2013. The operator of that site, Ross Ulbricht, known to users only as the Dread Pirate Roberts, was convicted on drug charges in February of this year. 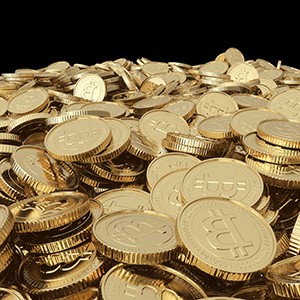 WARNING: Bitcoin is NOT a tangible asset.
This image is used figuratively.

Bitcoin users are drawn to the crypto currency by its promise of privacy. Buyers, sellers and intermediaries believe they can all remain anonymous. That does not mean they will be safe.

The victims in this story, buyers of illegal drugs, are unlikely to garner much sympathy with the public at large. But there is an important lesson, and the lesson is particularly relevant to bullion investors who have legitimate reasons of their own to demand privacy. It is perfectly reasonable to demand transaction details remain confidential, but you should never sacrifice knowing exactly with whom you are transacting.

There is no substitute for trust. That is one of the reasons why we at Money Metals Exchange regularly put our own names out in articles, podcasts, and other educational communications. It is why you can find details about us at MoneyMetals.com. It’s why we are accredited by the BBB (with an A+ rating) and why we are members of our industry’s trade group -- the Industry Council for Tangible Assets (ICTA). We want our customers to know who we are and what we stand for.

Money Metals’ commitment to transparency, content, value, and service earned us recognition as “Best in the USA” among hundreds of other dealers.