DEATH OF THE U.S. DOLLAR RESERVE CURRENCY... Picking Up Speed

The Death of the U.S. Dollar as the world’s reserve currency will have a profoundly negative impact on the lives of most Americans. Unfortunately, 99% of the population has no clue. The only reason 1% of U.S. citizens understand what is going on, is because the Mainstream media and financial networks have distorted the truth and the reality of our present situation.

For a few brief hours overnight – until the bell rang at 0930ET on the NYSE – investors were anxious about North Korea’s most provocative yet missile launch, the terrible flooding disaster in Texas, and lest we forget, the looming debt ceiling debacle. But all of that was instantly forgotten as the machines took control and lifted stocks higher practically all day on a sea of USDJPY-ignited momentum.

Looking at the chart above, we can see that when fear came into the markets during the North Korea missile incident and then the opening of the European markets (shown in the two red boxes), the Dow Jones Index fell as well as the USDJPY, while gold and the U.S. Treasurys increased.

However, after the U.S. markets opened, MAGICALLY everything reversed because the nuclear threat with N. Korea, Biblical flooding in Texas and the upcoming debt ceiling issue no longer mattered. Those of us in the Alternative Media find this quite hilarious that nothing negatively impacts the financial markets anymore. Some have laughed while saying, “If a nuclear bomb had taken out New York City, the stock market would probably go up.” While I doubt that would happen, it is becoming a real joke to watch the financial markets today.

I wrote about the insanity in the markets today and how it has negatively impacted the value of the precious metals in my recent article, The Reason Why Gold & Silver Have Frustrated Investors Since 2011. In the article I posted the chart below, by a Deutsche Bank analyst Aleksandar Kocic, on why the Markets Broke In 2012:

The description of the indicator above may be a bit difficult to understand so that I will simplify it. The BLUE LINE represents the “Economic Uncertainty Policy” (EPU index) shown by the frequency of articles in ten leading US newspapers that contain three of the target terms: economy, uncertainty; and one or more of Congress, deficit, Federal Reserve, legislation, regulation or White House in the mainstream media. The BLACK LINE is the VIX index, the volatility index (S&P 500). Economic uncertainty printed in articles in the Mainstream Media should correspond with the volatility indicator of the markets (the VIX).

And, this is what precisely took place from 1996 to 2011. The blue and black lines moved up and down in tandem. However, after 2011, something changed. According to Kocic:

Intuitively, when VIX is in tune with EPU, the market is acknowledging the levels of risk through the prices. However, when VIX is low and EPU high, markets are complacent – they are underpricing risk.

After 2011, the two measures of risk decouple with VIX consistently low despite growing uncertainty. The breakdown is structural, and it is visible across all market sectors, not only equities.

What Kocic is saying is that the market has become highly complacent and is severely underpricing risk.

This is exactly what happened today. Not only do we have a threat of a Nuclear incident with N. Korea, but Houston is dealing with epic flooding from 4-5 feet of rain, while the U.S. Government is about to hit a wall with the debt ceiling issue. Those three factors would have caused the markets to sell off considerably 5-10 years ago. Again, according to the chart above, it doesn’t seem to matter how much negative news there is in the economy, the markets have to continue higher or remain elevated, or else the entire house of cards comes down.

The U.S. Dollar As The World’s Reserve Currency Is Under Serious Pressure

According to Clive Maund’s article, DOLLAR update as LOSS OF RESERVE CURRENCY STATUS LOOMS... if the U.S. Dollar breaches its support level, then it could go into freefall: 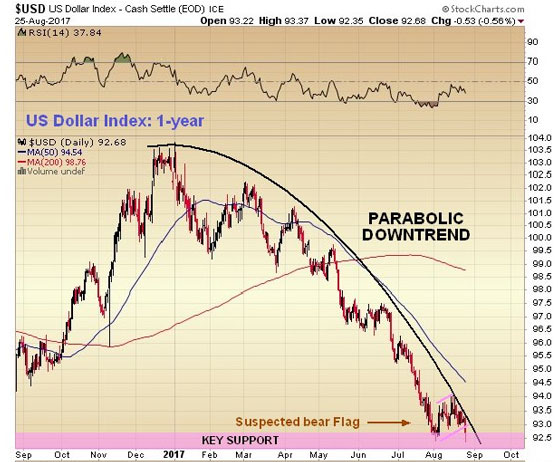 While I don’t pay a lot of attention to technical analysis, many traders do. Clive Maund states in his article that the U.S. Dollar is due for a bounce because it is oversold. But, once the bounce is over, we could see the Dollar decline considerably as the U.S. Government has to deal with the debt ceiling issue.

When the U.S. Dollar is no longer the reserve currency of the world, Americans will be forced to live on a lot less. We won’t be able to exchange worthless U.S. Treasury paper for oil, metals, commodities, goods or services anymore. We will need to trade GOODS for GOODS, not PAPER for GOODS.

The only way the U.S. economy can continue moving along is via the U.S. Dollar being the world’s reserve currency. When the U.S. Dollar is no longer the world’s reserve currency, it will be difficult to pay for oil with worthless U.S. Treasuries. Of course, the Fed and U.S. Treasury may speed up the printing press to make up for our ongoing trade deficits, but that would likely erode the value of the Dollar.

The Death of the U.S. Dollar will be the end of America as we know it. Unfortunately, a tiny percentage of those in the Alternative Media Community realize this, while 99% are completely oblivious.