How much of an impact would the monetization of the Mexican Silver Libertad have on the market? There could be serious ramifications if we consider the vast amount of silver consumed by the minting of Mexican silver coins in the past. Before I get into that data, let’s look at the following text from the article, The Mexican Congress Debates the Monetization of the ‘Libertad’ Silver Ounce, on Hugo Salinas Price’s plata.com site:

The central feature of the proposal is that the Central Bank of Mexico (Banxico) shall determine a value in pesos for the “Libertad” silver ounce; and that this value shall be slightly higher (by a percentage that would be defined in the corresponding Law) than the price of silver in the international market, in order to provide Banxico with an assured profit in minting and placing these coins in monetary circulation.

....if the price of silver should shoot upward, Banxico would have to issue new, higher quotes for the “Libertad” silver ounce (according to the formula to be established by Law). In this way, again, the coin will remain “in circulation”, and since it has no nominal price stamped on it, it will avoid ending up – like all the old silver coins that had stamped values – at the refineries.

Most of those old silver coins, once their content was worth more than the peso stamped value on their faces, ended up in the refineries. The holders of the coins sold their coins at a profit, for their silver content.

This won’t happen with the “Libertad” silver ounce, whose value will be adjusted upward, and benefit the saver, who will thus retain his purchasing power no matter what may happen with inflation. Thanks to owning silver “Libertad” ounces, the public’s savings will float on the ocean of currency through the years.

A Proposal to Monetize the Silver Libertad

The important feature in the proposal to monetize the Silver Libertad was that the Central Bank of Mexico would adjust the value of the coin based on the price of silver, rather than striking a permanent numerical value on the face of the coin. By basing the value of the Silver Libertad on the market value of silver, this would protect the Mexican citizen from the ongoing devaluation of the Peso.

For example, the Mexican Peso has devalued 93% versus the U.S. Dollar since the mid-1970’s: 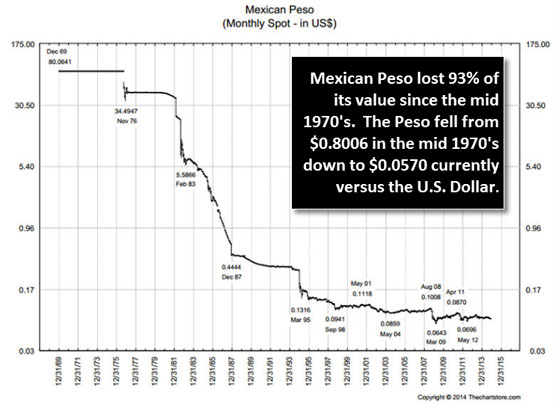 The Mexcian Peso was valued at $0.8006 to the U.S. Dollar in the mid-1970’s but is now trading at $0.0570. Thus, the Mexican Peso has lost 93% of its value in just the past 40+ years. We can see the devaluation of the Mexican currency much better by looking at the relationship between the amount of silver contained in each coin versus the number of Pesos struck on the face of the coin.

The following table came from the MexicanSilverCoins.net site: 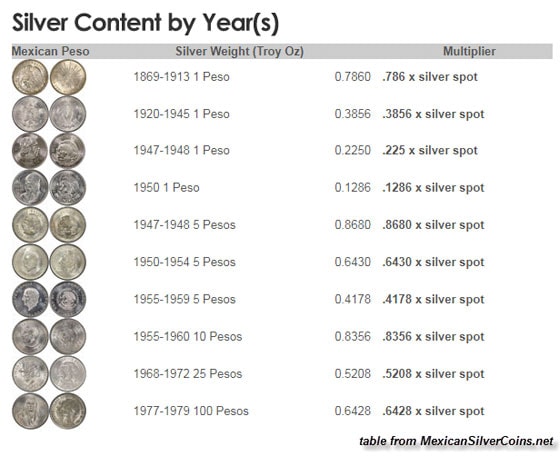 While I knew the Official Mint Of Mexico produced a lot of silver coins in the past, I had no idea the huge amount until I looked up the data. According to figures put out by the SilverAgeCoins.com, the Mint of Mexico produced a great deal of Silver Pesos and Silver 50 Centavos in the early to mid part of the 20th Century: 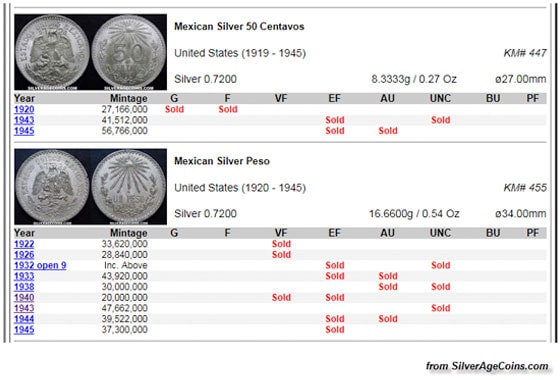 I focused on the mintage figures for these two coins in 1943. Total Silver Pesos & 50 Centavos minted in 1943 were 89.2 million coins. However, the total silver contained in these two coins minted that year was 26.5 million oz (Moz):

I did not do extensive research on all the silver coins produced by the Mint of Mexico in 1943, but I would imagine there were others. For example, I found on the same website listed above that 3,955,000 of the Mexican Silver 20 Centavos were produced in 1943 as well. However, the amount of silver in each of the 20 Centavos was only 0.08 (oz), which netted a total of 316,400 oz of silver consumed.

Regardless, the Mint of Mexico produced one heck of a lot of silver coins during that period. Now, if we consider that the Mexican government consumed 26.5 Moz of silver to mint the Silver Peso and Silver 20 Centavos coins for a total population of approximately 20 million in 1943, how much silver would they consume to protect the value of its current 130 million citizens?

As I stated in the previous section, the Mint of Mexico consumed 26.5 Moz of silver in producing their Silver Peso and Silver 50 Centavos coins in 1943. That being said, let’s look at Mexico’s total silver mine supply during the same year. According to the information put out by the U.S. Bureau of Mines, Mexico produced 86.4 Moz of silver in 1943:

Thus, Mexico consumed 30% of its domestic mine supply just to produce two of its silver coins in 1943. Furthermore, the population of Mexico at the time was approximately 20 million. Thus, the Mint of Mexico consumed 1.3 oz of silver in the Peso & 50 Centavos coins for each citizen. That’s a lot of silver.

Now... let’s fast forward to present day. The amount of Silver Libertads, the Mint of Mexico, produces today, are a fraction of what they were in the past. According to the data put out in the 2017 World Silver Survey, there was only 800,000 oz of Silver Libertads produced in 2016:

As we can see, the Mint of Mexico produced 800,000 oz of Silver Libertads versus 40.3 Moz of American Silver Eagles Coins fabricated by the U.S. Mint last year (Check out US mint gold sales and silver sales of these coins). The irony about those two figures is that the U.S. had to import silver to produce the 40.3 Moz of Silver Eagles as its domestic mine supply was only 35 Moz. On the other hand, Mexico produced 186 Moz of silver in 2016, more than five times that of the United States.

Something is seriously wrong here. Why is Mexico exporting all of its silver for worthless fiat money if its citizens could acquire domestically minted Silver Libertads to protect their wealth in the future? I would imagine the U.S. government has something to do with controlling Mexican officials in keeping their citizens entirely in the dark about silver as MONEY and a STORE OF VALUE.

If the proposal to monetize the Silver Libertad gains traction in Mexico, the silver market would be in serious trouble. Here’s why. Currently, Mexico produces about 186 Moz of silver: 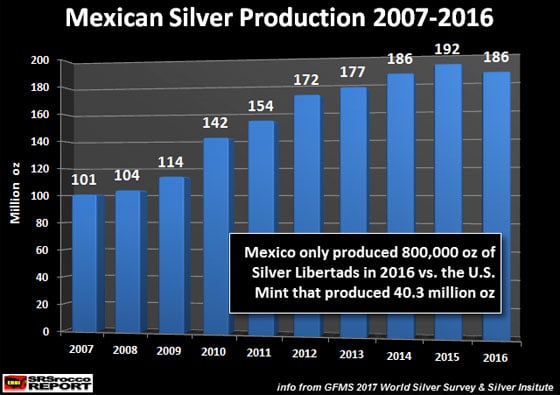 If the Silver Libertad was monetized and 30% of Mexico’s silver production was used to produce these coins, as it was in 1943, it would consume nearly 56 Moz of the country’s domestic mine supply. Moreover, with a population of 130 million in Mexico, 56 Moz of Silver Libertads would amount to less than a third of an ounce of silver for each citizen.

While it is an excellent idea that the Silver Libertad is monetized as protection for Mexican citizens against the ongoing devaluation of the Peso, it will be an uphill battle in state politics. Unfortunately, the world depends on a lot of silver coming from Mexican mines to supply the global jewelry, electronics and investment industries. If its citizens consumed a significant portion of Mexico’s silver production in acquiring vast numbers of Silver Libertads, it could severely impact the silver market and price.

It will be interesting to see how far this proposal to monetize the Silver Libertad goes in the Mexican government.