The motivation to write this article came from several of my readers who sent me an interview by CPM Group’s Jeff Christian, at the San Franciso Gold and Silver Summit. In the video, Jeff claims that there has been a silver market surplus for ten years and those industry analysts, who have reported deficits, "Are simply wrong." Jeff goes onto to say, “they have been wrong the entire time they have been on the silver market.”

Jeff continues by explaining that to analyze the silver market correctly, you must look at surplus and deficits based on total supply versus total fabrication demand. Furthermore, he criticizes industry analysts who may be promoting metal by throwing in investment demand to arrive at a deficit. He says this is not the proper way to do “commodities research analysis.”

Jeff concludes by making the point, “that if you keep silver investment demand as an “off-budget item,” then the price matches your supply-demand analysis almost perfectly.” Does it? Oh… really?

If we look at the CPM Group’s Supply & Demand Balance chart, I wonder how Jeff is calculating his silver price analysis: 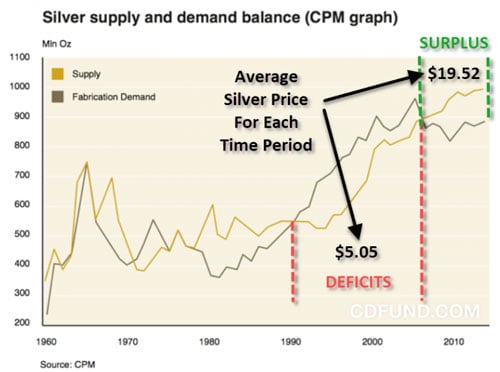 Again, Jeff states during the interview that their supply-demand analysis, minus investment demand, provides an almost perfect price analysis. According to the CPM Group’s 2016 Silver Yearbook, the total surplus for the period 2008-2016 was approximately 900 million oz. With the market enjoying a near one billion oz surplus, why would that be bullish for a $20 silver price?? It isn’t… and I will explain why. 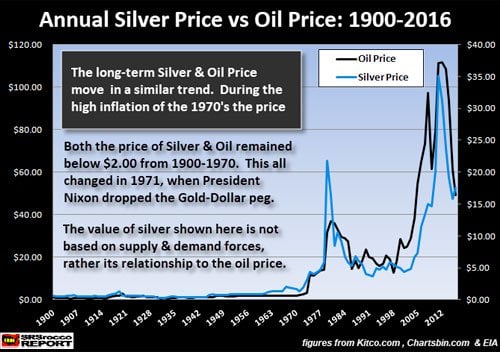 You will notice the huge price spike in the 1970’s after Nixon dropped the Gold-Dollar peg causing inflation to run amuck in the United States. Now, the oil price didn’t impact just silver; it also influenced the value of gold: 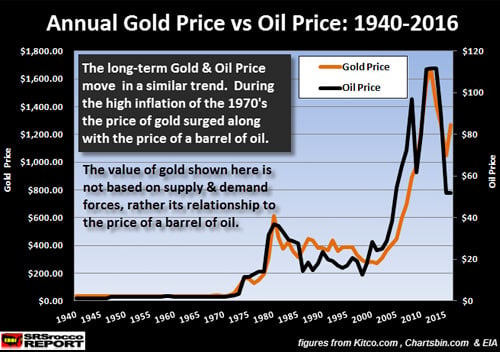 As with the oil-silver trend lines, the gold and oil price lines remained flat until the U.S. went to a 100% Fiat Currency system in 1971. So, if we decided to throw out all gold and silver supply-demand forces, we can see that these precious metals prices paralleled the oil price. Now, the reason the price of silver shut up to an average of $19.52 from 2006-2017 was due to its average cost of production. Today, the market price of silver is $16.42, and the average cost of primary silver production is between $15-$17 an ounce. According to my analysis of the top two gold mining companies, their cost of production is about $1,150. Hence, the 71-1 Gold-Silver price ratio.

The only way an individual would believe that the primary silver mining companies are producing silver at $5 an ounce is if they believe in the investor presentations that report CASH COSTS. Anyone who continues to use CASH COST accounting needs to get their head examined. It is by far the most bogus metric in the industry that has caused more confusion for investors than anything else… well, if we don’t include faulty analysis by certain individuals.

I find it utterly amazing that the CPM Group entirely omits silver investment from their fundamental analysis. Here is a chart of their total world silver fabrication demand from their 2016 Silver Outlook Report: 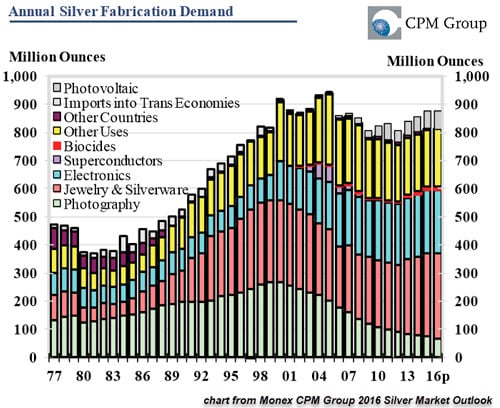 If you are a silver investor, your demand doesn’t count. It doesn’t matter if you purchased 100 of the half a billion oz of Silver Eagles sold by the U.S. Mint since 1986. How many Silver Eagles have been sold back, melted down and returned to the market to be used for industrial applications?? According to the 2017 World Silver Survey (GMFS), total Official Silver Coin sales were 965 million oz (Moz) since 2007. If we add Official Silver Coin sales for 2017, it will be well over one billion. I highly doubt any more than a fraction of that one billion oz of Offical Silver Coins were remelted and sold back into the market.

CPM Group only values silver as a mere commodity for the sole purpose of supplying the market for industrial, jewelry, silverware, photography and photovoltaic uses. I gather 2,000+ years of silver as money no longer matters. Yes, I would imagine some precious metals investors are feeling a bit frustrated as they watch Bitcoin go vertical towards $12,000. But a word of caution to Bitcoin investors who are dreaming about sugar plums dancing in their heads and dollar signs in the eyes.

Now, when you see an article titled, Signs Of A Market Top? This Pole Dancing Instructor Is Now A Bitcoin Guru; it might be prudent for you to recall a memorable part of the move in The Big Short:

There is a wonderful scene where a pole dancer is explaining to a fund manager how she’s buying five houses.

A lowly paid pole dancer who survives on unpredictable tips should not be able to afford multiple houses, but this was the sub-prime USA where the ability to repay a loan was apparently not a prerequisite.

Regardless, the notion by CPM Group that investment demand shouldn’t be included in supply and demand forecasts suggests that the gold market has experienced a total 418 million oz (Moz) surplus since 2006. Yes, that’s correct. I calculated total global gold physical and ETF investment demand by using the World Gold Council figures: 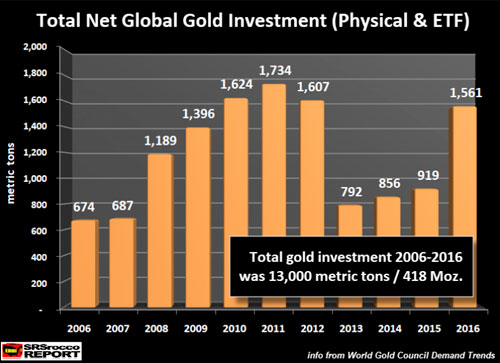 The reason for the drop-off in net gold investment in 2013-2015 was due to Gold ETF liquidations. For example, 915 metric tons (29 Moz) of Gold ETF inventories were supposedly liquidated into the market. Even though the gold market experienced a record 1,707 metric tons of physical bar and coin demand in 2013, the liquidation of 915 metric tons of Gold ETF’s provided a net 792 metric tons of total gold investment. Please understand, I am just using these figures to prove a point. I really don’t care if the Gold ETFs have all their gold. I look at Global Gold ETF demand (spikes) as an indicator for gauging the amount of fear in the market.

The CPM Group does the same sort of supply and demand analysis for gold. They omit investment demand from the equation: 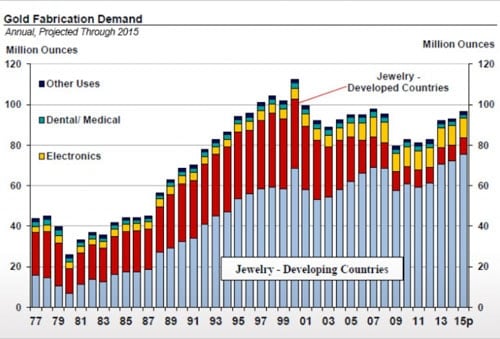 Again, according to the CPM Group, gold bar and coins aren’t fabricated. They must be produced by Gold Elves in some hidden valley in the Grand Canyon. No doubt, under the strict control by the NSA department of the U.S. Government.

For anyone new to reading my work… I am being sarcastic.

Precious metals investors need to understand there is a huge difference between Gold and Silver versus all other metals and commodities. The overwhelming majority of commodities are consumed while gold and to a lesser extent, silver, are saved. And, they are being purchased as investments and saved for an excellent reason.

The world continues to add debt at unprecedented levels. In just the month of November, the U.S. Government added another $137 billion to its total debt. This doesn’t include the $610 billion of additional debt added since the debt ceiling was lifted on September 8th. So, the American public is indebted by another $747 billion in less than three months.

Getting back to silver, according to the GFMS team at Thomson Reuters, who provide the World Silver Survey for the Silver Institute, the market will experience a small annual silver surplus this year for the first time in several decades: 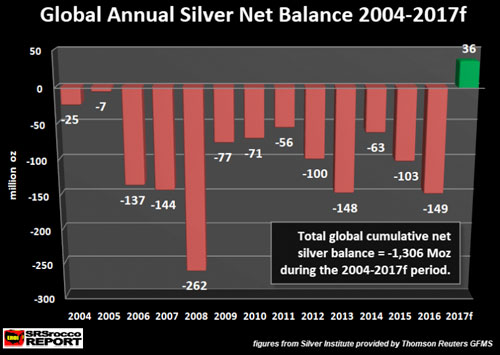 The reason for the surplus has to do with a marketed decline of silver investment demand this year. With the election of President Trump to the Whitehouse and the “Pole Dancing Guru” Bitcoin market moving up towards $12,000, demand for the silver investment fell by 50% this year. However, I don’t look at it as a negative. Oh no… it’s an indicator that the market has gone completely insane.

This reminds me once again of the movie, The Big Short. In the movie, the main actor bets big against the Mortgaged-Backed Securities. Unfortunately, just as the housing markets start to crash and the mortgage-back security market begins to get in trouble, the bets that the main actor in the movie made, began to go against him. That’s correct. His short bets against the market should have started to gain in value, but the banks wanted to dump as much of that crap on other POOR UNWORTHY SLOB INVESTORS before they would let it rise.

We are in the very same situation today. However, the entire market is being propped up, not just the housing market.

It is impossible to forecast a more realistic gold and silver price when 99% of the market is invested in the wrong assets. So, for the CPM Group to value gold and silver based on their fabrication demand totally disregards 2,000+ years of their use as monetary metals.

For example, if we look at total global silver investment demand and price, there isn’t correlation: 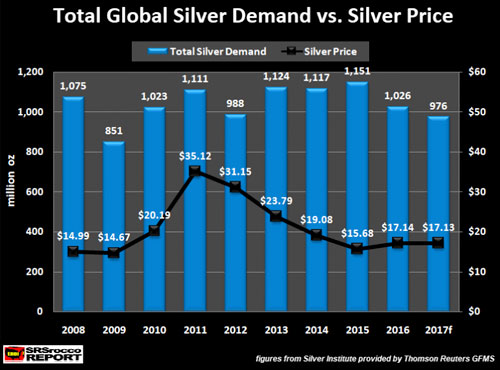 But, if we look at what happened to silver investment demand since the 2008 Housing and Banking collapse, we can spot a significant trend change: 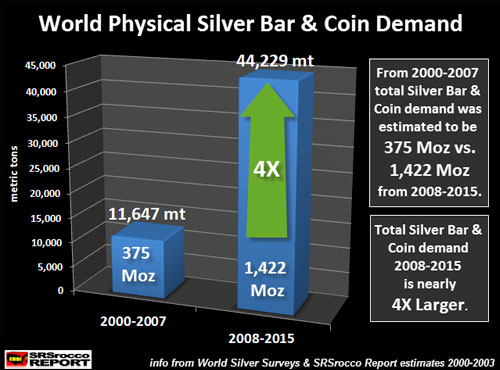 As we can see, world physical silver bar and coin demand nearly quadrupled after the 2008 Housing and Banking collapse. This is the indicator that is important to understand. While silver investment demand after 2008 has increased partly due to the higher price, the more important motivation by investors is likely a strategic hedge against the highly-leveraged fiat monetary system and stock market.

Investors who follow the CPM Group’s analysis on gold and silver based upon fabrication demand only, are being misinformed. Jeff Christian who runs the CPM Group has no idea about the Falling EROI – Energy Returned On Investment or does he understand the dire energy predicament we are facing. Thus, Mr. Christian and the CPM Group still look at the markets as if they will continue business as usual for the next 50 years.

We are heading into a future that we are not prepared. The economy and markets will likely disintegrate much quicker than anything we have experienced before. I believe the Bitcoin-Cryptocurrency market is going to collapse shortly due to what I see as extreme leverage in the system with very little in the way of cash reserves. I hear stories that trading in and out of cryptos isn’t a problem until you want to receive a substantial amount of funds in your bank. That is a huge RED FLAG.