The gold market is setting up for a perfect storm as the top mining producers’ supply is forecasted to decline right when demand is likely to surge. The surge in gold demand will occur as the broader stock markets roll over and begin their inevitable massive correction. Due to the tremendous amount of leverage in the system, the coming market correction will be quite violent at times. If investors believe the correction is over, and high times are here again, then they haven’t learned anything about the cyclical nature of markets.

We can see this quite clearly in the following two charts which came from the article, As Bitcoin Nears $11,000, Here’s A History Of Its Biggest Ups And Downs: 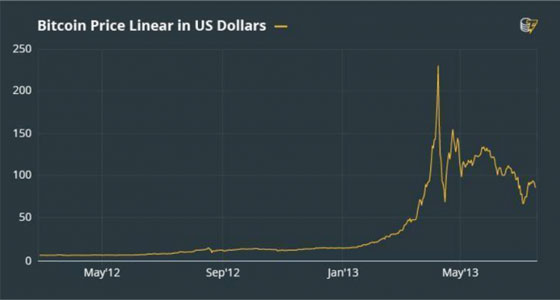 The price of Bitcoin in 2013 surged higher, crashed and then corrected higher before falling over the following year. The same thing took place in 2013 and 2014: 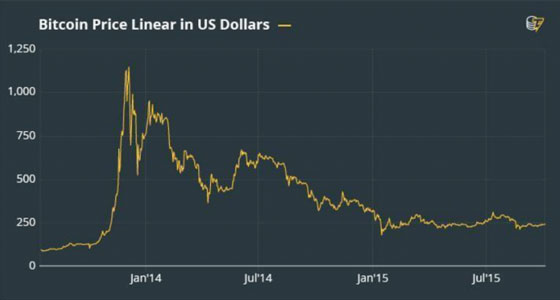 Now, I put this chart together to compare the current Bitcoin price trend with the previous graphs: 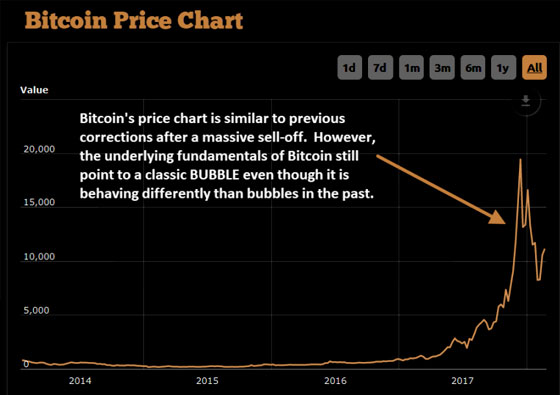 As we can see, after Bitcoin fell from nearly $20,000 to $6,500, it reversed and quickly added $5,000. But, this is exactly how corrections behave, as they did for Bitcoin in the past. Moreover, the Bitcoin price may move even higher before it starts to sell-off in the longer-run. Unfortunately, the notion that Bitcoin will continue to endure these corrections on its way to $100,000 or $1,000,000 will likely disappoint crypto investors who are counting on a wealthy lifestyle from their tremendous digital Bitcoin profits.

I realize my opinion on Bitcoin and the Crypto Market runs counter to many followers or a percentage of the Alternative Media. While a decentralized cryptocurrency seems much more appealing than our present highly leveraged debt-based fiat monetary system, it has degraded to nothing more than mere hype and speculation. Furthermore, even though blockchain technology offers positive solutions, it can function quite nicely without the highly speculative crypto coin values.

In a nutshell, blockchain and hashgraph technology can offer useful solutions, however, rampant speculation causing volatile cryptocurrency values are worthless distractions. Regardless, Bitcoin and the Crypto Market are behaving like classic bubbles and will eventually end up at the same value from where they started. So, it’s probably a good tactic for crypto investors to consider SELLING THE RALLIES rather than BUYING THE DIPS.

If we understand that the stock and crypto markets are bubbles, then it can be said that the opposite is true for the precious metals. Thus, when these bubbles pop, logic suggests that investors will seek the 2,000+ year store of value history of the precious metals. As I have mentioned in several articles and videos, investors moved into gold in a big way during market turmoil. The two record quarters of Gold ETF flows were Q1 2009 and Q1 2016. Both periods had one thing in common, investors panicked into gold because they thought the markets would continue to head much lower.

While the Dow Jones Index fell 3,000 points and has reversed much higher, this is only the first stage of the massive correction and crash to come. Again, stock markets don’t go down in a straight line.

If we apply the logic that investors will return to buying gold hand over fist as the markets sell off, they will be doing so right at a time when supply from the top miners declines. According to Barrick Gold’s yearend results, they forecast production will decrease from 5.3 million oz (Moz) in 2017 to 4.7 Moz in 2018 and even lower to 4.4 Moz in 2019. In just two years, the largest gold producer in the world is forecasted to lose nearly one million oz of production.

If we look at the top four gold miners past production (Barrick, Newmont, AngloGold & Goldcorp) and the forecast for future supply, the picture isn’t pretty: 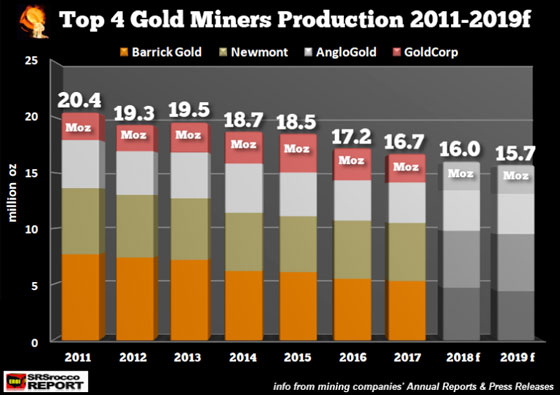 What a difference since 2011 when the top four gold miners were producing 20.4 Moz. In just six years, the combined production from these top gold miners fell by 3.7 Moz to 16.7 Moz. While the majority of the decline came from Barrick, Newmont and AngloGold suffered production decreases of 700,000 oz each during the same period. The only miner in the group that experienced an increase in production was Goldcorp. However, Goldcorp’s production peaked in 2015 at 3.5 Moz and has fallen to 2.6 Moz in 2017.

The problem that all these gold mining companies are facing is the consequence of the Falling EROI (Energy Returned On Investment) of energy on their ability to sustain or increase production. Moreover, the rapid decline in the gold price since 2012 has destroyed the ability for these gold miners to invest enough capital to sustain or increase production. This next chart shows the dramatic reduction in capital expenditures (CAPEX) in the top four gold miners: 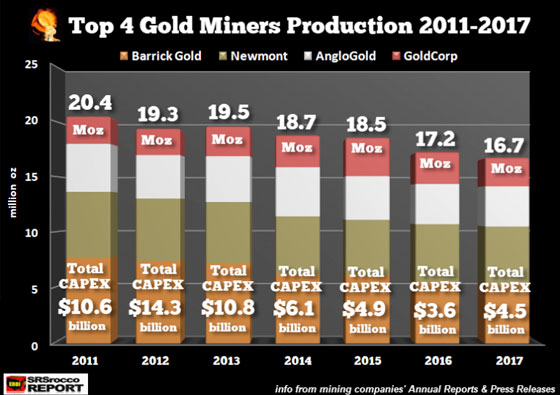 Unfortunately, the forecast of continued falling mine supply from these top gold producers will take place right at the same time investors will be moving into gold in a BIG WAY. Thus, a spike in demand will cause the gold price to increase, but it will still take years for these miners to increase production. Thus, a surging gold price will not impact gold mine supply for years… if ever.

I say, “If ever,” because there is still the issue of the Falling EROI and its impact on the U.S. and global oil production. I know that sounds insane to say as U.S. oil production hits new record highs, but future production at this level is not sustainable. I posted this chart in a previous article, and it’s worth looking at once again: 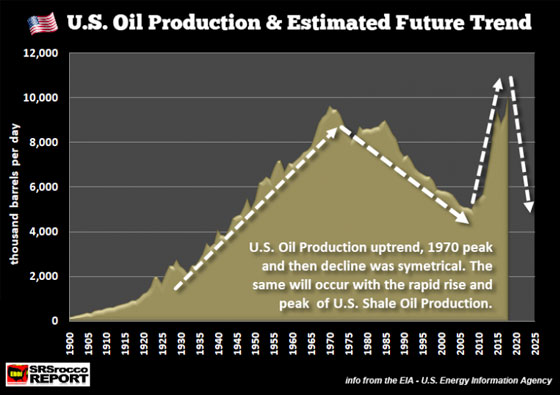 While anti-peak oil enthusiasts are smacking each other on the back pointing to the supposed success that technology has solved the issue of resource depletion and thermodynamics, the tremendous rise of U.S. shale oil production will be a FLASH IN THE PAN. Another easy way to explain the U.S. shale oil phenomenon is by applying the simple logic…

….. What goes up quickly, also comes down quickly.

Lastly, as the stock and crypto markets correct higher, they won’t do so forever. Matter a fact; they will likely correct lower much quicker than investors realize. Also, while the broader markets are in a bubble, the Crypto market is in a massive bubble.

As investors flee bubble assets, if they are smart and prudent, they will move into gold and silver to protect wealth. Unfortunately, just at the time when investors are moving into gold in record numbers, the mine supply from the top gold producers will continue to fall. This is a perfect storm that will cause much higher gold prices for investors who are wise enough to see it.