The Swamp vs. Alternative Currencies

Among those who are "not thrilled" about the prospect of higher interest rates: the President of the United States.

....The United States should not be penalized because we are doing so well. Tightening now hurts all that we have done. The U.S. should be allowed to recapture what was lost due to illegal currency manipulation and BAD Trade Deals. Debt coming due & we are raising rates - Really?

Trump seems surprised that the Fed careerist he promoted to be chairman isn’t embracing Trump’s economic priorities. But nobody drawn from the fiat money swamp should be expected to act contrary to what’s in the institutional interests of the central bank – and the banking elite more broadly.

Swamp creature Powell couldn’t even bring himself to express support for Trump’s pro-growth tax and regulatory reforms during last week’s testimony. He nervously evaded a simple question from a Republican Congressman about whether tax cuts and deregulation have boosted business confidence. Even when pressed, he wouldn’t answer it.

Powell apparently didn’t want to say something that might offend Democrats. The Fed is “independent,” after all, and non-partisan. It has to keep up appearances before Congress.

But when it came to the question of cryptocurrencies, the government’s top banker felt free to go on at length about why he doesn’t like them.

“Cryptocurrencies are great if you’re trying to launder money or hide money,” Powell snarked. “And the money laundering and terrorist financing is a big risk.”

Powell – who is a lawyer by training and not an economist – explained to Congress that "relatively unsophisticated investors” were being drawn to crypto markets in the hope of price gains. Just like they are drawn to high-flying equity or housing markets when the Fed artificially pumps them up, he might have added (but obviously didn’t).

Powell went on to attempt a philosophical take-down of Bitcoin, stating, “There is no promise behind it. It’s not really a currency. It doesn’t really have any intrinsic value…”

A central banker who presides over a $4 trillion balance sheet of unbacked IOUs and runs a digital printing press that can generate fiat dollars in unlimited quantities is probably the least credible person ever to lecture about intrinsic value!

If Powell really believes intrinsic value is an essential feature of a currency, then he should call for the dollar to once again be redeemable in gold or silver.

He won’t, of course.

The banking system and deep state don’t like hard currency any more than they like cryptocurrency as a competing alternative to the fiat regime they control. Alternative currency proliferation is making them nervous.

Many members of Congress, especially on the Democrat side of the aisle, welcomed Fed chair Powell’s cryptocurrency bashing. 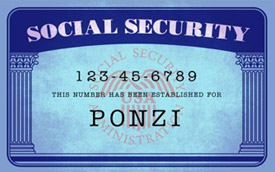 He should know. As a borrow-and-spend member of Congress, Peterson’s complicit in running up unfunded liabilities larger than Charles Ponzi himself could have imagined.

That’s what happens when gold is not present in the monetary system to constrain the ambitions of politicians.

If you believe Rep. Brad Sherman (D-CA), “There is nothing that can be done with cryptocurrencies that cannot be done with sovereign currency that is meritorious and helpful to society.”

Swamp creatures like Sherman have used sovereign currency to saddle taxpayers with more than $21 trillion in debt. If he really wanted to be “helpful to society,” he’d vote to strip Congress of the power to engage in deficit spending. He wants to ban the trading and mining of cryptocurrencies instead.

Cryptocurrencies lack tangible value, and that does make them speculative and potentially prone to abuse. But no currency is more prone to abuse than an unbacked fiat currency that can’t or won’t compete freely in the market.