Italy Borrows Too Much, The US Borrows More

Last week’s rally in the U.S. dollar was driven largely by weakness in the euro.

Italy was back in the headlines. The Italian government committed to borrowing even more money and, to the surprise of nobody with sense, the odds of default on Italian debt leapt higher.

Italian bonds are getting clobbered, and renewed concerns over the potential for a default now weigh heavily on the euro. Populists rose to power in recent Italian elections, promising to reduce austerity and increase government spending to stimulate the moribund economy.

Last week they delivered, passing a budget with large increases in a number of programs. The deficit there is expected to rise from 0.8% of gross domestic product to 2.4%, triple what was planned before.

The Italian government has already borrowed well in excess of the nation’s gross domestic product. The debt to GDP ratio is currently 132%. Those who own Italian bonds are right to be nervous.

When will the holders of U.S. Treasury debt begin wising up? Investors seem to think default is only possible elsewhere. European nations such as Italy, Greece, and Spain have been cycling in and out of financial turmoil for years now. So far, none of this has troubled the U.S. bond market.

The people who are worried about a jump in deficit spending in Italy ought to have a look at U.S. deficits when compared to federal spending... 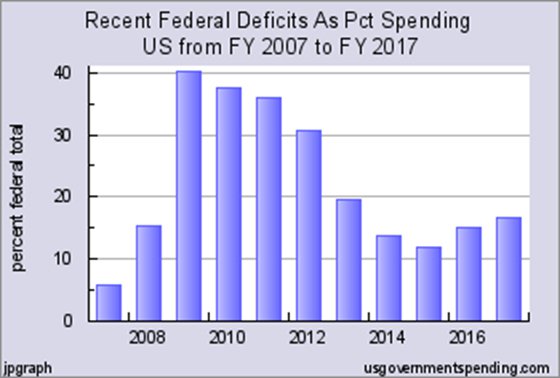 The 2018 deficit is forecast to be 20% of overall spending. Currently one in five dollars spent in Washington has been borrowed. There has not been a year below 10% since before the 2008 financial crisis. And deficits are back on the rise, since bottoming in 2015.

The U.S. debt to GDP ratio currently rests at 104% and it is growing quickly. The trillion dollar deficit projected for next year will push that ratio to near 109%. When we get a major recession like the one plaguing Italy, GDP will be falling and our politicians will be pouring on the stimulus spending. The ratio will explode higher.

Regardless, investors should anticipate the U.S. debt to GDP ratio will reach Italy’s levels sometime in the next few years. That is coming even if we don’t get a recession.

The U.S. is not Italy, we are told. The Italians cannot print money, without first leaving the European Union. If push comes to shove, Italian bondholders will likely not be paid as agreed. But holders of U.S. Treasuries can (presumably) count on the Federal Reserve to print up any dollars needed to avert a default.

Just because the U.S. central bank can print dollars doesn’t mean Treasury securities are truly secure investments. If their purchasing power gets destroyed through inflation, that outcome is just as bad for investors as forfeiting most of their bond principal to a bankrupt creditor.

Lending money to irresponsible and profligate governments eventually ends in pain. That is true everywhere, not just Italy.