Despite posting impressive gains in the third quarter, gold and (especially) silver finished it on a downbeat note.

The disappointing finish to the month and the quarter does raise the possibility that momentum selling could continue to drag prices lower in the near term. However, quarter-end profit taking and portfolio shuffling by institutional futures traders could also work in favor of an immediate price bounce.

The big question is whether silver’s strong breakout this summer to multi-year highs was a fluke… or a prelude to bigger things to come.

At the time, multiple indicators pointed toward it being the real deal – the first big impulsive wave within a larger new cyclical bull market for silver. Price itself is the most important technical indicator, and the silver price had broken out of a long consolidation phase to spike up just shy of $20.00/oz by early September.

The subsequent pullback came as no surprise to our readers. We warned on August 29th, with silver rallying above $18.50/oz, that it “may finally be due for a pause, if not a pullback.” We noted that a gauge of weekly upside momentum was “in extremely overextended territory.”

Now that some of the overenthusiastic speculators who entered the market at higher prices have been washed out, we suspect that the remaining bulls have strong hands and will tend to be buyers rather than sellers on any further price declines.

We will be watching the gold:silver ratio closely during days when precious metals markets rally for confirmation that silver is leading.

In a healthy bull market for the metals, silver leads on both the upside and the downside – both rallying and declining more sharply than gold.

As silver prices surged earlier in the year, the gold:silver ratio declined rapidly from a quarter-century high of over 93:1 to as low as 80:1. In September, the ratio spiked back above 86:1 as silver sold off.

The chart of the gold:silver ratio appearing below suggests we could soon see a turn in favor of silver. In recent years, the ratio has tended to key off its 200-day moving average. It ran straight into that line on Monday. 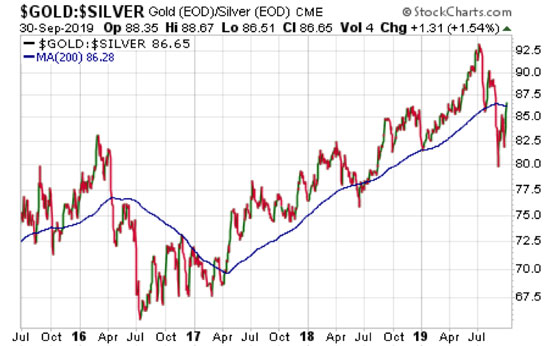 The 200-day moving average is starting to point down for the first time since 2016. That suggests the major trend for the gold:silver ratio is also down – which, again, would be bullish for silver in particular and precious metals in general.

Another ratio that tells an interesting story is that of gold:platinum.

Earlier this year, gold commanded a historically large premium over platinum (1.8:1). Up until the current decade, the norm was for gold to trade at a discount to platinum. 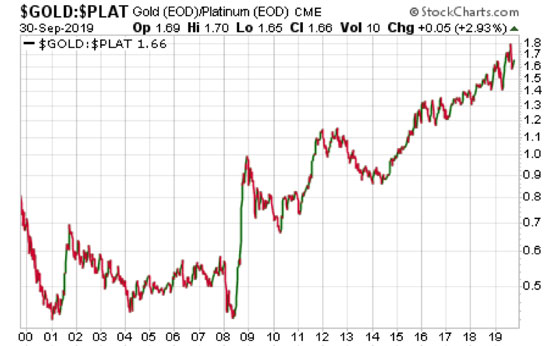 Fundamentally, the platinum market has suffered from softening automotive demand as automakers have favored palladium for use in catalytic converters. Palladium, which historically traded at a discount to platinum, now trades at a premium to both platinum and gold.

At some point, the value proposition offered by platinum should become compelling to both industrial consumers and precious metals investors. But at this particular point, the beaten down metal shows no technical signs of trending higher against either palladium or gold.

The most compelling ratio trade in the metals space at the moment appears to be to favor silver over gold.

Conservative investors will want to still hang on to a core gold position. However, more aggressive investors who are inclined to trade might consider selling gold in exchange for silver.

If the gold:silver ratio trends in favor of silver in the months and years ahead, the magnitude of the move should be more than large enough to offset the transaction costs associated with switching in and out.

Of course, it’s more likely that gold would show significant nominal appreciation on the way to a 32:1 gold:silver ratio. A $2,500 gold price would imply $78 silver – more than 4.5 times today’s spot silver quote.

These are not price forecasts, but rather just illustrations of potential price scenarios that (among many others) could play out over time. As always, precious metals investors should retain a long-term perspective and be prepared to weather near-term volatility.