Could Silver "Do a Palladium"?

Palladium was manipulated for years. It had the largest short position relative to its size, while physical demand rose inversely to decreasing supply.

In 2018, demand became so large that it overwhelmed the shorts.

Physical palladium could not meet the market's needs and prices exploded. Shorts eventually decreased their positions until they got to a more sustainable level.

For many years, the platinum/palladium ratio, shown on proprietary charts, averaged 2.4 to 1 in favor of platinum, stretched as high as 5:1 in 2009, but then collapsed for a decade into 2020, to where 1 ounce of palladium would buy 5 ounces of platinum!

Today, much like what was the case with palladium, the concentrated short position in silver is unsustainable.

Ted Butler has been writing about it for two decades, and we can be forgiven for thinking it will never change. But at some point soon, it appears the shorts WILL be overwhelmed.

Indeed, the rats are already leaving the sinking ship.

Witness Scotia Mocatta's exit, and if Ted is correct, J.P. Morgan's has reversed its long-standing position of being massively short silver, to going long.

The "normal" Gold/Silver Ratio is set to fundamentally change.

Gold Silver Ratio over 50 Years
Through the 2020 Spike High 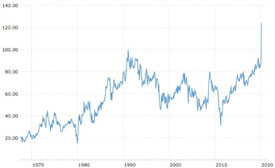 Like a stone tossed into a quiet pool, the rings of effect will spread out in ever-widening circles, when (not if) this comes to pass.

As Willem Middelkoop, Author of The Big Reset says, "If silver breaks, then the gold manipulation might break as well, and then you will have a real crisis within the monetary system, because then the dollar system is at risk... This is what can happen, and I believe will happen to silver...

There are structural changes for silver in the supply/demand metric, projected growth of new use cases, degradation of a decades-long pattern of unrestrained "paper silver" futures and mining share selling – not to mention changing investment demand ratios compared to industrial use.

Therefore, it's probable that – just like the gold-to-platinum, and platinum-to-palladium ratios – silver is set to massively outperform gold.

The First Stage: Just moving the ratio into the lower range of 40:1 gives us all-time nominal highs and vast outperformance for silver.

The Second Stage: Turning the gold/silver ratio on its head. Another underappreciated factor is that Bitcoin's meteoric rise, if sustained, could blunt global gold demand.

Then if silver recedes to $250 you would have a "normal" 40:1 ratio. Under this scenario, primary silver producers would be "digging up money" in exchange for fiat!

Meanwhile, it's not a good idea to "challenge" the COMEX.

In The Art of War, Sun Tzu cautioned against attacking an opponent head on. He also said you should set the field of battle so that you had already won before the conflict began.

This is exactly what the denizens at the "CRIMEX" do, and why they continually defeat all comers.

A (much) better way to "un-game" the silver system.

Uber-trader "Plunger" writing on Rambus1 com, comments: So why the strength in silver? I think it’s because the bullion bank silver cartel is in the process of unraveling and its ability to maintain its concentrated short position is entering into its last days...despite the army of silver detractors out there, the charts signal to me that silver is on the verge of a breakout..."

The WallStreetBets-Robinhood-GameStop fiasco poked a hole in the vaunted Masters of the Universe's game plan.

The losers are learning the old winner's tactics and bringing new tools to bear.

Don't try to win by holding "faux silver" positions like the ETF SLV.

Don't buy silver from trading houses that charge you for an empty vault while they write derivatives and lease out what they do have.

This will keep the pressure on the paper pushers as the ongoing effect of declining silver production through lower grade and a dearth of big discoveries takes silver stores into their fifth consecutive year of decline... just like what happened to palladium.

News broke this week that BlackRock, the world's largest asset manager, sold a third of its GLD shares in late 2020 and put a big chunk of the proceeds into the silver ETF, SLV.

It sure looks like the dominoes holding up the old way of doing things are starting to fall. If even BlackRock is now "going for the silver" shouldn't you?