As state legislatures clear out and head home for the summer, one reality has emerged: Sound money is a winning issue in the states.

At a time of record-high inflation and geopolitical uncertainty across the globe, states are wisely taking steps to better enable citizens to acquire, sell, and/or use gold and silver.

Last year, Arkansas and Ohio repealed sales taxes on gold and silver coins, bars, and rounds. And Ohio invested almost $1 billion worth of physical gold in its Ohio Police and Fire Pension fund.

This year brought three new legislative victories in Tennessee, Virginia, and Alabama, thanks largely to efforts by Money Metals Exchange, its customers, and its Sound Money Defense League project.

All told, sound money allies introduced bills in 11 states to remove sales and income taxation on the monetary metals, create state depositories, and/or protect state pensions and reserves with an allocation to physical gold.

Virginia had exempted sales taxes on most purchases of precious metals back in 2015, but purchases under $1,000 were still taxed and the whole exemption was scheduled to sunset this year.

Mobilizing grassroots support, the Sound Money Defense League worked with Delegate Amanda Batten’s office on House Bill 936 and secured a five-year extension of the existing exemption, while also securing its expansion to cover ALL transaction sizes.

Before the ink could dry on Gov. Glenn Youngkin’s signature, Alabama finalized sound money legislation of its own.

In addition to prompting in-state supporters to make literally thousands of calls and emails to members of the Alabama House and Senate, Money Metals’ public policy team worked closely with legislative allies to extend Alabama’s precious metals sales tax exemption and also clarify that the exemption covers ALL common forms of bullion. 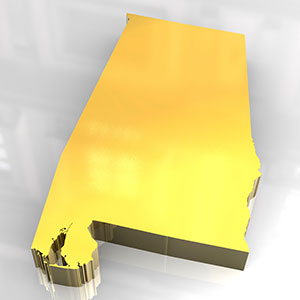 During a house committee hearing on Alabama’s Senate Bill 13, the committee chairman proclaimed the precious metals bill was “the most popular bill of the session.” Governor Kay Ivey’s signed SB 13 into law in April.

Meanwhile, a groundswell of Volunteer State citizens prompted the Tennessee legislature to secure its place as the 42nd state to remove sales taxes from gold, silver, platinum, and palladium coins, bars, and rounds.

During the Senate floor vote, Sen. Janice Bowling commented, "I just want to thank the senator for bringing forward this bill along with half of the state of Tennessee that contacted all of us!"

Meanwhile, sound money bills in other states fell short of passage, but efforts laid the groundwork for victories in 2023 and beyond.

Kentucky House Bill 272 aimed to remove sales taxes on gold, silver, platinum, and palladium coins and bars, but the measure did not receive a hearing this year.

HB 426 passed the Mississippi House by a vote of 121-1 but died in Sen. Briggs Hopson’s Senate Appropriations Committee without a hearing.

In Hawaii, Rep. Val Okimoto led the way in pushing sound money legislation (House Bill 1184) out of the House Finance Committee. It passed overwhelmingly out of the full House but failed to receive a hearing before Hawaii’s Senate Finance Ways and Means Committee.

Meanwhile, lawmakers in Alaska held two hearings on House Bill 167, a measure to declare gold and silver “specie legal tender” as well as prevent boroughs and cities from slapping sales taxes on purchases of the monetary metals.

In the Garden State, Assemblyman Ronald Dancer introduced A3007 to end New Jersey’s sales taxes on precious metals. A companion bill was introduced in the New Jersey Senate while other cosponsors joined the effort.

New Jersey’s legislature is still in session, so there’s still an outside chance of progress there this year.

Meanwhile, Oklahomans appear eager to build on the Sooner State’s existing sound money policies. Proponents introduced bills to eliminate capital gains tax on the sale of precious metals, establish an in-state gold depository, and protect taxpayer reserve funds with gold and silver. These bills enjoyed grassroots support, but they did not pass out of any committees.

The Idaho House overwhelmingly passed a bill that would permit the state treasurer to hold gold as a hedge against the state’s massive pile of negative yielding debt paper, but the senate failed to act on the bill.

In the end, the big news for 2022 is the newly minted sales tax exemption in Tennessee – followed by more incremental wins in Virginia and Alabama.

As the de facto public policy leaders for the entire precious metals industry, Money Metals Exchange and the Sound Money Defense League are preparing to redouble efforts in the remaining eight sales tax states and continue pushing ahead on other policy fronts.

As inflation rages on, the folly of endless currency printing becomes more undeniable.

Thankfully, individuals, states, and even countries are increasingly considering the role of gold and silver in protecting against the twin threats of Federal Reserve Note devaluation and weaponization.