Do You Trust Paper Promises or Physical Reality?

We have often spoken of the difference between what is commonly thought of as “money,” i.e. paper currency, versus actual physical precious metals. Historically, money has been gold, silver (and at one time copper) – and now for an increasing number of savers, platinum and palladium.

What’s the track record of paper currencies? Should we care? 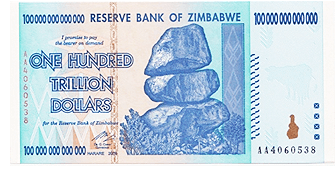 Paper currency was introduced by the Chinese around 1400 years ago. After a pretty good run as a “money substitute,” the authorities got carried away with new issuance, and their currency declined to its intrinsic worth – the value of the ink and paper it was printed on, i.e. essentially zero.

Since then, countries around the globe have followed this path, each time with the same results. Make an Internet search for the American Continental, the French Assignat, or the German Mark of the 1920’s. Consider the Chinese yuan, which traded at par with the U.S. dollar in 1927. Its “value” in 1949, just 22 years later was 23,280,000 yuan to the dollar.

Then we have the Zimbabwe “non-dollar.” In a relatively short time, declining from around 4:1 to the USD, it finally took over one-hundred trillion of them to buy just one greenback! Ironically, collectors now pay several dollars on eBay to purchase worthless Zimbabwe banknotes!

Other Currencies and Gold Chip Away at Dollar Monopoly

“But the U.S. dollar still has value!” you say. In one sense this statement is correct.

The “petrodollar” – as the internationally circulating reserve currency, which other nations must use in order to buy oil or major commodities – still rules. But the BRICS (Brazil, Russia, India, China and South Africa) have begun chipping away at this monopoly – exchanging their own currencies with each other in trading, but also using barter, and sometimes issuing payment in gold.

Of course, the green parchment in your wallet can still put gas in your tank, buy groceries, or pay the rent. But consider that in terms of purchasing power, your dollar, in relation to what it would buy when the Federal Reserve was established in 1913 has declined by… roughly 99%! More recently, what cost just 17 cents in 1971 would cost a dollar today.

Inflation in the U.S. continues apace – greatly understated by the government, year after year. Try protecting your purchasing power while “earning” a fraction of a percent each year, which, adding insult to injury, is then taxed!

The currency in your account is truly a “paper promise.” While it’s no longer redeemable at your bank for what has historically been considered “money” – gold and silver – you can for now, still purchase real money with your paper currency.

Lately, an ominous development has been overtaking the domain where citizens just like you and I hold much of our financial wealth – bank accounts and safety deposit boxes.

This year, the Australian federal government seized $360 million from bank accounts which had not seen activity for as little as three years (prior to a recent change in the law, it was 7 years before such government theft could be undertaken). Some of these accounts contained only a few hundred dollars. Others were worth literally millions. Over 80,000 accounts – many owned by retirees and pensioners – have thus far been seized by the government.

Lest you think this is just practiced Down Under, consider that in the U.S., all 50 states now have some form of asset forfeiture language related to dormant accounts. The practice goes by various names, such as the “Disposition of Unclaimed Properties Act.” By any reasonable definition, this kind of behavior calls into question a core assumption of the concept of private property.

Ask yourself this – shouldn’t an account be awarded to survivors of the deceased in accordance with the directions in their will, regardless of how long it was inactive? What about long-term savings for a child’s college education or a special project? What’s wrong with placing funds in an account – inactive and out of direct sight – in order to meet some long-term financial goal?

Simon Black, Editor of Sovereign Man sums up the implications. Says he:

So much for setting aside money for a rainy day and having the discipline to never touch it. If you’ve locked away money for your children’s savings or unforeseen emergencies, your government might be sharpening its knives ready to dig in.

And just like central bank policies punish savers with interest rates that don’t come close to keeping up with inflation, these policies provide disincentives for people to be responsible and save money. It’s just another example of how the entire system is rigged against the individual… and all the more reason to divorce oneself from it. Physical gold, anyone?

Beyond the constant loss of purchasing power of the “paper promises” in our wallet, we must now contend with the intentional drive at all levels government, to harvest for their own use whatever they can access of our remaining wealth.

You would do well to start acquiring or continue adding to your stash of precious metals – what David Morgan refers to as “physical reality” in exchange for a portion of the “paper promises” upon which you now rely. Exercise your right to privacy. Keep your holdings in a secure place where you and perhaps one other trusted person have access to them.

An old Arabian saying sums up the present conditions quite well. It states, “Three things come not back – the spoken word, the spent arrow, the missed opportunity.”

With gold now trading over $1,300 per ounce, silver at $21, and palladium well above $800, is the current situation fated to soon become a “missed opportunity”? Only you can decide.