The Fed finally acted this week – upping its benchmark Federal Funds rate by 0.25%. Now that the speculation over whether the Fed will hike has been put to rest, analysts are busily speculating about what the Fed's move means for the economy and markets.

Many of these speculations are unfounded. It's time to bust some silly myths.

Much of what's spewed out in the financial media concerning interest rates is flat-out wrong, especially when it comes to their impact on precious metals markets. Since gold and silver are small markets compared to bonds and equities, some “analysts” apparently think they don't need to do actual research on precious metals markets before commenting on them. It's easier to regurgitate oft-repeated myths about rising rates being bad for gold than it is to actually check the data.

Ahead of the Fed's decision, the Wall Street Journal naively reported that “a shift to higher rates is expected to hurt gold, which doesn't pay interest and costs money to hold.”

Setting aside the fact that not everyone who holds gold incurs storage fees (it costs you nothing to keep gold coins in your own house), let's consider the core assertion that higher rates hurt gold. Recent history shows that assertion to be utterly false. 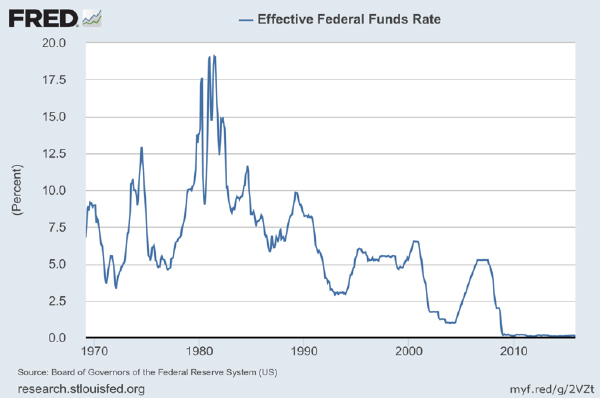 The myth of rising rates being bad for hard assets persists in spite of data that show the exact opposite is true.

During periods when the Fed tightens, the best performing asset class by far is commodities. According to Allianz Global Investors, commodities have produced average gains of more than 25% when rates were rising, based on data going back to 1983.

What Happens to Gold When Interest Rates Rise

Anyone who suggests that rising nominal interest rates make hard assets unappealing as investments hasn't looked at recent history and doesn't grasp that what matters are real (not nominal) interest rates.

When the nominal rate set by the Fed is lower than the rate of inflation, then real rates are negative. In an environment where the Fed funds rate shot up to 10%, but price inflation was running at 15%, then “doesn't pay interest” gold would be fundamentally more attractive than cash at a -5% real rate.

But if at some point investors start expecting inflation rates to fall below nominal interest rates (real rates to turn positive), then investors might flee gold for interest-bearing instruments.

The Fed's 0.25% hike won't in itself change much in the real economy. But it may get investors thinking about the possibility of inflation rates emerging from these lower levels. In the Federal Open Market Committee's Statement following its decision to hike this week, the FOMC stated it was “reasonably confident that inflation will rise, over the medium term, to its 2 percent objective.”

The Fed noted that “monetary policy remains accommodative.” It vowed to continue reinvesting principal payments and rolling over its holdings of Treasuries, agency debt, and mortgage-backed securities. Its $4.5 trillion balance sheet won't be shrinking anytime soon. Overall, the Fed's Statement was widely interpreted as dovish.

Gold and silver prices both advanced on Wednesday following the Fed's decision and then fell on Thursday. All the noise aside, there is plenty of fundamental support for the case that the metals are at or near a turning point.

Demand for gold and silver coins will set a record this year. Meanwhile, spot prices have traded below mining production costs for much of the year – presaging supply destruction in the months ahead.That is a far more important development in the outlook for precious metals markets than anything the Fed did or said this week.