Among all the choices you have for gold and silver bullion, genuinely historic metal is still around at reasonable prices. The runaway classic is ninety-percent U.S. silver coinage.

The lyrical ring of a handful of silver coins speaks not only to the history of the United States but also the entire heritage of sound money. Simply put, pre-1965 silver used to be called "pocket change." Everyone had some, saved some, spent some. Silver money was a natural part of everyday life.

Today, those circulated silver coins are the remnants of economic confidence Americans once took for granted. After the government cut the cord to gold in 1933, which affected the possesion of US Gold Coins Pre 1933, Americans still had their silver for another three decades.

Congress discontinued silver coin currency in 1965 as the nation was slipping into irreparable bankruptcy. 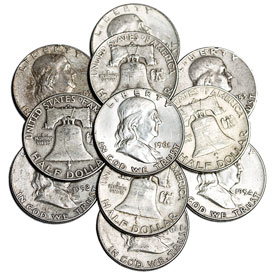 President Lyndon Johnson demonstrated his economic ignorance by warning Americans against hoarding the silver coins. “There will be no profit in holding them out of circulation for the value of their silver content.”

Nor does it include U.S. silver nickels (1942-45). For over three years, five-cent coins were 35% silver. Nickel for plating armor on WWII's tanks and ships was too valuable to use in coins.

We're also not talking about U.S. silver dollars (also ninety-percent), but cast with 6.5% more silver than you'll find in ten dimes, four quarters, or two halves. Hefty silver dollars are in a class by themselves.

Ninety-percent silver has all the pluses:

As a modern endorsement, the demand for fractional coins and the growing shortage of ninety-percent led the bullion industry to develop its own fractionals in tenth-ounce, quarter-ounce and half-ounce rounds.

Calculating dollar values of ninety-percent is quick and easy, once you understand the mix.

New silver coins came from the U.S. mints with silver weighing .7234 troy ounce per face-value-dollar. Decades in circulation wore away some silver content.

When news came that silver would disappear from coins by 1965, savvy stackers salted away silver coins, including newer dimes, quarters, and halves from the 1950's and early 60's.

Their cost was an even trade of paper money for coins at face value – meaning no cost at all! Despite LBJ's ignorant warning, silver coinage all but disappeared from circulation in just a few years. Free silver, for those with foresight 50 years ago.

Today's ninety-percent bags are a mix of the older, worn coins, and newer, less-circulated coins.

Marketing ninety-percent by face value makes more sense than weighing each individual coin every time it's bought and sold. The bullion market took wear and tear into account, determining a silver weight of .715 ounces per dollar as the go-to multiplier.

In case you're wondering, no one is charging for – or paying for – the 10% of those 90% junk silver coins, which is copper. One day, such small amounts of copper might affect the selling price. But that’s not the case today. Free copper!

Could Today’s U.S. Jefferson Nickels Be the New Junk Silver?

The intrinsic (metal) value of a five-cent piece (75/25 copper-nickel) is 3 cents, and was as high as 7.5 cents a few years ago. By contrast, metal value in a circulating post-1964 dime (same copper-nickel ratio) is 1 cent. Coin debasement on parade. 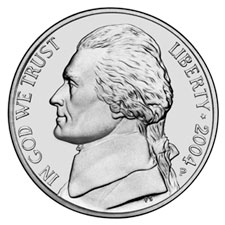 Congress moans and groans every year over replacing nickels with cheaper mystery metal. Even older, tough-as-nails Jeffersons show little or no wear. Your cost today to put some away: Free.

The higher price of gold has always been the best salesman silver ever had.

At the historic silver-to-gold ratio today of 79:1, silver below $16 is dirt-floor cheap compared to gold, also historically cheap at around $1,250.

There are more examples of silver used as money over the centuries than gold. More stackers of precious metals started with silver than gold.

In an economic meltdown, panicky newcomers to precious metals will choose the cheaper silver sooner and more often than they will turn to the more expensive gold.

It's better to be in line early and ahead of time, before the panicky crowds, and prices, turn up.